Webhook as a Service

While I was at API Days this weekend in San Francisco, I managed to catch a handful of talks Saturday afternoon after I landed at OAK. While listening to each talk, I kept hearing one technical API building block, over and over--webhook.

Webhooks are a common way for API providers to make API integration a two ways street for consumer. Developers, or even non-developers, can setup webhooks via common API platforms, and receive notifications about different events and activities that occur.

Webhooks are also a common tool for API automation and reciprocity platforms like Zapier and IFTTT. Users can setup webhooks, that respond to just about any action across multiple, API driven platforms. 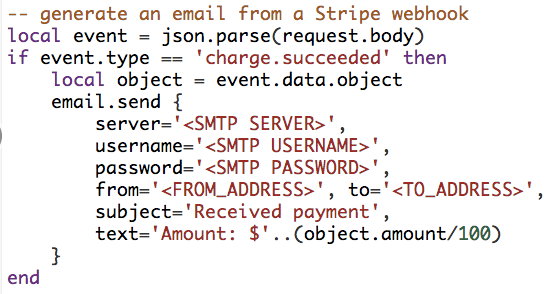 After hearing webhooks mentioned so often, I wondered if anyone out there is offering web hook as a service (WHaaS) (LOL). Sure enough, John Sheehan (@johnsheehan) pointed me to webscript.io.

Webscripts are short scripts, written in Lua, that run in the cloud servers, and can respond to any HTTP requests.

Exactly what I was looking for. I had heard of webscript.io before, but for some reason it didn't stick in my mind. It is precisely the simple approach I was looking for, and has many common examples like sending emails, counters, parsing RSS and Tweeting.

I really like dead simple implementations like webscript.io, that solve real world problems in such granular, yet powerful ways. Nice work @smarx.