API Monetization In The Internet of Things @ Nordic APIs

I have a panel this week at Nordic APIs called Business Models in an Internet of Things, with Ellen Sundh (@ellensundh) of Coda Collective, David Henricson Briggs of Playback Energy, Bradford Stephens of Ping Identity and Ronnie Mitra(@mitraman/a>) of Layer 7 Technologies. My current abstract for the panel is:

As we just begin getting a hold on monetization strategies and business models for APIs delivering data and resources for mobile development. How will we begin to understand how to apply what we have learned for the Internet of Things across our homes, vehicles, sensors and other Internet enabled objects that are being integrating with our lives.

In preparation for the event I am working through my thoughts around potential monetization strategies and business models that will emerge in this fascinating adn scary new world where everything can be connected to the Internet---creating an Internet of Things (IoT).

Where Is The Value In The IoT?
When it comes to monetizing APIs of any type, there first has to be value. When it comes IoT where is the value for end-users? Is it the device themselves, is it the ecosystem of applications built around a device or will it be about the insight derived from the data exhaust generated from these Internet connected devices?

Evolving From What We Know
After almost 10 years of operating web APIs, we are getting a handle on some of the best approaches to monetization and building business models in this new API economy. How much of this existing knowledge will transfer directly to the IoT? Freemium, tiered plans, paid API access and advertising--which of these existing models will work, and which won't.

Another existing model to borrow from when it comes to IoT is the telco space. The world of cellphone and smart phones are the seeds of IoT and one of the biggest drivers of the API economy. How will existing telco business models be applied to the world of IoT? Device subsidies, contracts, data plans, message volumes are all possible things that could be borrowed from the existing telco world, but we have to ask ourselves, what will work and what won't?

Will Developers Carry the Burden?
When it comes to API access, developers often pay for access and the privilege of building applications on top of API driven platforms. Will this be the case in the IoT? Will the monetization of IoT platforms involve charging developers for API usage, number of users and features? Is this a primary channel for IoT device makers to make money off their products? In the beginning this may not be the case, with providers needing to incentivize developers to build apps and crunch data, but it is likely that eventually developers will have to carry at least some of the burden.

Micro-Payment Opportunities
The payment industry is booming in the API Economy, but micro-payments are still getting their footing, doing better in some areas than others. Certain areas of IoT may lend itself to applying micro-payment approaches to monetization. When you pass through toll booths or parking, there are clear opportunities for micro-payments to engage with Internet connected automobiles. Beyond the obvious, think of the opportunities for traffic prioritization--do you want intelligence on where you should drive to avoid traffic or possibly pay per mile to be in a preferred lane? Another area is in entertainment, in generating revenue from delivering music, audiobooks and other entertainment to drivers or passengers in IoT vehicles and public transportation. 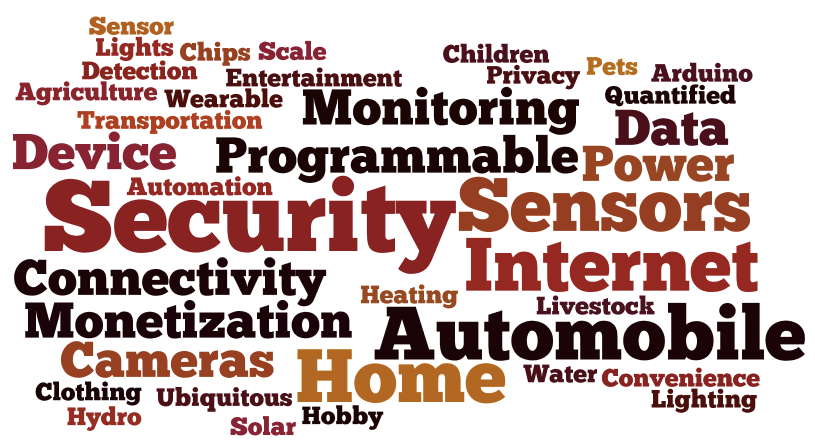 Will IoT Be All About The Data
As we sit at the beginning of the era of big data, driven from mobile, social and the cloud, what will big data look like in the IoT era. Will the money be all about the data exhaust that comes from a world of Internet connected device, not just at the individual device and the insight delivered to users, but at the aggregate level and understand parking patterns for entire cities or the electricity consumption for a region.

Security Will Be Of High Value In IoT
We are already beginning to see the importance of security in the IoT world, with missteps by Tesla and camera maker TRENDnet. Will security around IoT be a monetization opportunity in itself? Device manufacturers will be focused on doing what they do best, and often times will overlook security, leaving open huge opportunities for companies to step up and deliver b2b and b2c security options and layers for IoT. How much will we value security? Will we pay extra to ensure the devices in our lives are truly secure?

I Will Pay For My Privacy In An IoT World
When all devices in my life are connected to the Internet, but also the world around me is filled with cameras, sensors and tracking mechanisms, how will privacy change? Will we have the opportunity to buy privacy in an IoT world? Will the wealthy be able to pay for the privilege of being lost in a sea of devices, not showing up on cameras, passed by when sensors are logging data? Privacy may not be a right in an IoT world it by be purely something you get if you can afford it. Will companies establish IoT business models and drive monetization through privacy layers and opportunities?

A IoT Las Vegas for Venture Capital
With IoT centered around costly physical devices, and potentially large platforms and networks, will anything in the IoT space be able to be bootstrapped like the web 2.0 and mobile space was? Or will all IoT companies require venture capital? At first glance IoT looks like a huge opportunity for VC firms, allowing them to specialize for the win, or gamble on the space like they would in Las Vegas.

Will We Plan For Monetization Early On In IoT?
When it comes to IoT, it is easy to focus on the monetization the physical device, either leaving money on the table with new an innovative ways of generating revenue, or possibly having monetization strategies that are behind the scenes and not obvious to users--something that could be damaging to security, privacy and overall trust in the IoT space.

We learned a lot from mistakes made in early social, cloud and mobile API monetization. We need to make sure and have open conversation around healthy IoT business models and monetization strategies. Generating revenue from IoT needs to be a 3-legged endeavor that includes not just IoT platform providers, but sensibly includes ecosystem developers as well as end-users.

The world of IoT is just getting going, but is picking up momentum very quickly. We are seeing IoT devices enter our homes, cars, clothing, bodies and will become ubiquitous in the world around us, embedded in signs, doorways, roadways, products in rural and metropolitan areas. It is clear there is huge opportunities to make money in this new Internet connected world, but let's make sure and have open conversations about how this can be done in sensible ways to make sure the IoT space grows in a healthy and vibrat way.