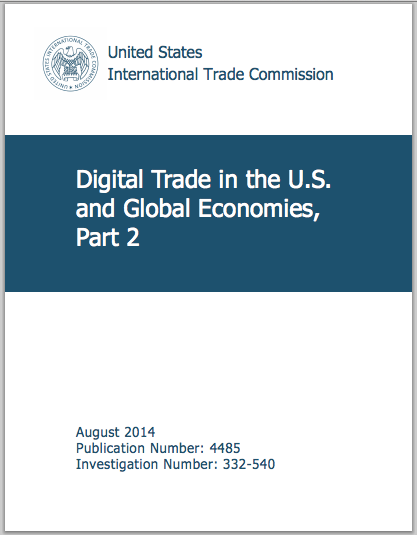 Those of us who live and breathe the API space, throw around a phrase, “The API Economy”, quite a lot. Referring to the increased usage of APIs across vital industries to drive web and mobile applications, but we as we do often, the phrase is used to describe the future of things, rather than where things actually are. While we are seeing APIs begin to affect global economies, we really don't have much hard evidence that "The API Economy" is a thing beyond our own techno fascination.

With the release of a new report from the U.S. International Trade Commission (USITC), called Digital Trade in the U.S. and Global Economies, us API geeks are getting the first actual evidence of "The API Economy", with a section in the report called "Increasing Collaboration and Integration in Online Services—The Economic Contributions of Application Programming Interfaces".

The USITC reached out to me several months back, and interviewed me as part of the work on the report, and this week I finally got to see the resulting work. The report is the second of two compiled by committee, with the first report, Digital Trade in the U.S. and Global Economies, Part 1 published last year. The earlier report laid the groundwork for the second report by providing an overview of trends in U.S. digital trade, describing the ways digital trade facilitates trade in other sectors, and approaches for estimating the economic impact of digital trade on the U.S. economy.

Now with Digital Trade in the U.S. and Global Economies, Part 2 the commission is focusing on the value of U.S. digital trade and the potential growth of this trade, providing insight into the broader linkages and contributions of digital trade to the U.S. economy (aka API economy). The report that includes a survey of U.S. firms in industries particularly involved in digital trade, also examines the effects of notable barriers and impediments to digital trade, and presents case studies that examine the importance of digital trade to selected U.S. industries, including the case study: "Increasing Collaboration and Integration in Online Services—The Economic Contributions of Application Programming Interfaces”.

It makes me happy to see APIs reflected alongside other aspects of our increasingly digital economy, and not just the good represented, but also many of the challenges we will face. It is my mission to make sure everyone understand that APIs are not good, bad or neutral, and that they are just the digital pipes that are making up the underbelly of this new economic landscape. My goal in using the word “API Economy”, is to highlight best practices around the tech, business, and politics of APIs, not to just get everyone hyped with yet another meaningless tech phrase.

After four years of hard work in the industry, it is good to see things beginning to mature, and go from just something just us alpha API geeks are paying attention to, to something government and industry leaders are taking notice of.