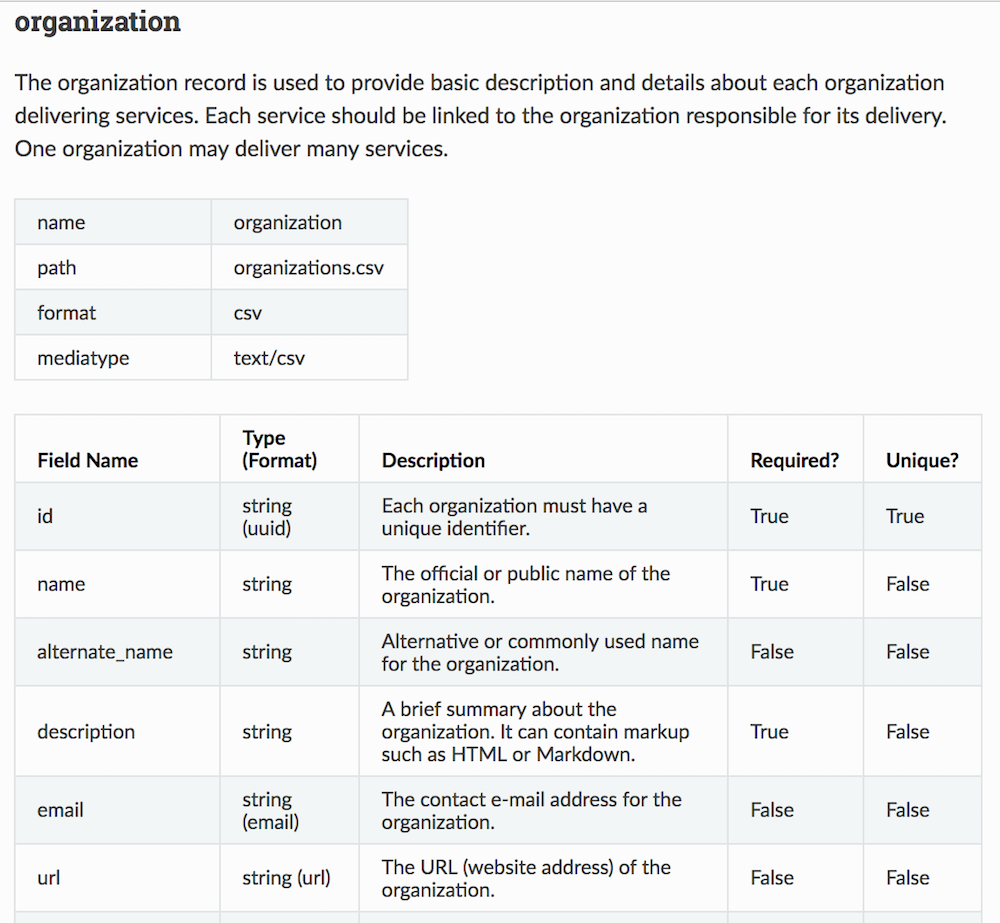 I had recently taken the Human Services Data Specification (HSDS) and exposed it as a set of API paths that provide access to about 95% of the schema, which we are calling the Human Services Data API (HSDA). When you make a call to the /organizations/ path, you receive an array collection of organizations that each match the HSDA organization schema. The same applies when you make a call to the /locations, /contacts, and /services, opening up access to the entire schema–minus three objects I pushed off until future releases.

After the core set of API paths /organization, /service, /location, /contact, there are a set of sub-resources available across those as it makes sense–including /phone, /programs, /physical_address, /postal_address, /regular_schedule, /holiday_schedule, /funding, /eligibility, /service_area, /required_document, /payment_accepted, /language, /accessiblity_for_disabilities, and /service_at_location_id. I took the HSDA schema, and published API paths for each sub-resource so that it exactly returned, and accepted HSDA compliant schema–making all aspects of the schema accessible via an API, with POST and PUT requests accepting compliant schema, and GET returning compliant schema.

One of the “stoppers” we received from several folks in the HSDS community during the feedback cycle going from version 1.0 of the API to version 1.1, was that the design was overly complex, and that it would serve any of the human services use cases on the table currently, unless you could get at all the sub resources directly with each core API path, eliminating the need for making additional call(s) to each sub-resource. You could get at everything about an /organization, /service, /location, and /contact in a single API URL.

To ensure that all sub-resource area available as part of each of the requests and responses for all core API paths, we are going to have to evolve the HSDS schema to be:

Once we add all relevant sub-resources added as arrays to the HSDS schema, we can allow API consumers to POST and PUT, or GET using as little, or as much of the schema using the path, header, or parameter. Allowing for reading and writing HSDS at the granular level, or everything at once using a single path.

Next we need to consider this updated schema as part of the 1.2 release of HSDS. If we update HSDA to allow for filtering the schema across /organization, /service, /location, and /contact, and return each sub-resource as part of the API request or response, it will be out of sync with HSDS. Ideally, both HSDS, and HSDA move forward in sync with each version. I’m curious why this expanded schema became such an issue once we got to the API phase–it seems like it should have been part of v1.1 of HSDS, making the schema drive the API instead of the other way around.

I’m guessing that these concerns about schema don’t come into focus until we start talking about access to the schema, and data. Making the separation and relationships between HSDS and HSDA all the more important, providing a framework to move the schema forward in a way that is rooted in how it will actually be accessed. Which is why we do APIs…