I attended Mashery's Business of APIs Conference in San Francisco on Thursday.

The event was kicked off with a complete history of APIs from Oren Michels the CEO of Mashery. Michels took us from pre-Internet examples of APIs through eBay pioneering in the space, the mashup explosion and to present day.

Then Mike Hart, Director of Engineering at Netflix, gave a talk on the evolution of its API strategy from crowd-sourced innovation to its API enabling it to deliver Netflix on 200 individual devices. APis definitely played a part in Netflix out-maneuvering Blockbuster in the online movie space. 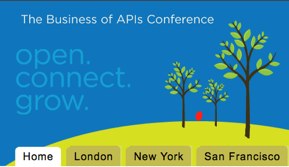 After Hart we heard from Danny Boice, from College Board who talked about his challenges around internally selling an API strategy and ultimately building a successful API. Boice delivers an entertaining story of his battle to convince his organization to use APIs.

Then the event went into series of rapid fire case studies from:

Mashery's Delyn Simons then moderated a discussion about what developers want from an API. On the panel was Ron Abbot of Egg Haus, Neil Mansilla CEO of Mansilla Dev and Kent Brewster a Developer at Vurve.

I thought one of the most compelling presentations was from Chris Vein, San Francisco's CIO. Vein described the convergence of government and technology with his opening of city data, requiring of open source, development of mobile apps, and learning from process and the community. He is working with other cities to exchange knowledge, data, and applications which gives me hope in a very depressing political landscape.

Mashery wrapped up the event with a Q&A session with Ryan Sarver the Director of Platform at Twitter. It gave some insight into the API operations of the sometimes poster child API ecosystem.

The Mashery Business of APIs was a perfect size event with some of the brightest minds that are delivering APIs and brainstorming the next generation of API ecosystem strategy. It was a great opportunity to network within the industry, exchange ideas, and get my API evangelism energy flowing.