API business models are still in its infancy. Many API owners are in experimental mode when it comes to how they make money with their API.

Beyond the fuzzy plans for how API owners intend to make money, even more API owners don't have a clear vision of how they will reward their developers, and share revenue with its API ecosystem.

There are examples of leadership from API owners. Qwerly gives discounts on API costs for high volume API users and YellowAPI pay developers for high volumes of traffic originating from their applications as well as sharing advertising revenue with developers.

The Bluevia API is another innovator in the space with its straightforward business models provided for its development community. Bluevia lays out four business models developers can choose from: 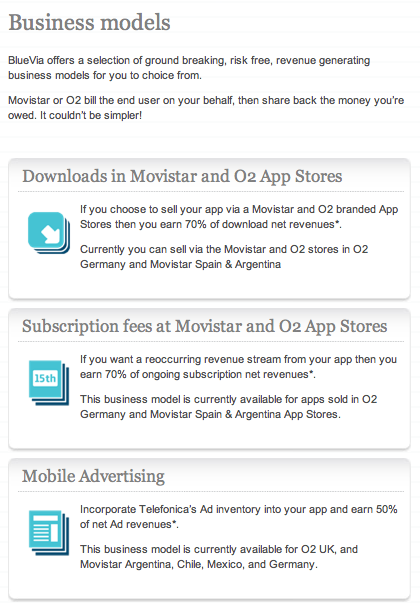 Bluevia provides a step-by-step process for walking developers through obtaining an API key, certifying an application and API key, publishing to the store, and collecting revenue from one or all of the available developer business models.

This type of straightforward approach represents the future of how API owners can clearly communicate how a platform intends to generate revenue, and share revenue with the developer community so that they too can be successful in building businesses around an API platform. It sets clear expectations with the developer community, allowing developers to understand the risks and benefits with building a business around an API.

Bluevia's approach to revenue earned from selling apps in a marketplace is nothing new. Other providers like YellowAPI also share mobile advertising revenue, and other service revenue with developers. What really stands out is their clear presentation of solid business models that developers can choose from. This identifies the value of the developer community, and gives them the clear revenue opportunities they need to be successful.