"The Mainstream New York Times Audience is Ready for APIs" 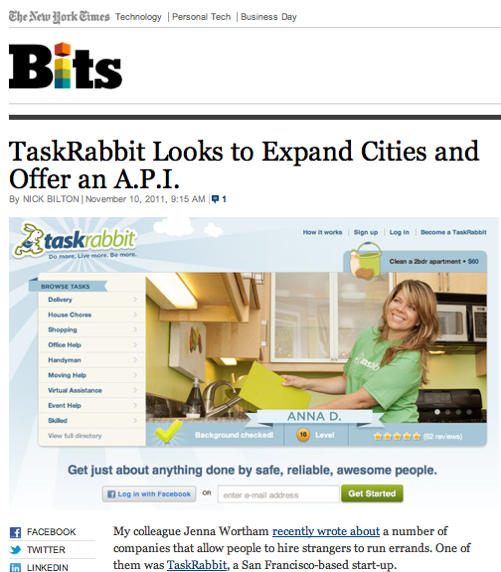 There was a post a couple weeks back in the New York Times Bits Blog called, "TaskRabbit Looks to Expand Cities and Offer an A.P.I."

Its a pretty straightforward post about the San Francisco based start-up, that gets you in touch with friendly, reliable people who can help you get just about anything you need done. At first glance, it is a pretty standard post. However I feel there are two things very notable about this post and more specifically, it’s title:

TaskRabbit Looks to Expand Cities and Offer an A.P.I.

One, the launching of an API is tied directly to the startups expansion into other cities. Those of us in the know, understand the important role an API plays in scaling your company, but explaining this to mainstream audiences is so important.

Two, that the acronym "API" gets used in a title of a mainstream publication like the New York Times.  Of course they spell it out in the article, but the editor expects that the user will understand the acronym in the title.

There are many API stories in 2011, but I think this really shows APIs are coming of age, when it is acceptable for a wider, mainstream audience to accept the term into their vocabulary.

One of the things I like about APIs is they are a silent, but powerful force behind many industry sectors including e-commerce, social, cloud computing and mobile computing. I think this use of API in the NYT represent classic API style, a silent coming of age, showing APIs are being adopted by a mainstream audience.