I’m working through lists of APIs and API service providers who I’ve rated pretty highly because of their work in the past, but red flags have gone up because I’ve haven’t seen a blog post, tweet or commit from them lately. One of the service providers I’m reviewing is Zypr, which providers voice enabled architecture built on popular APIs.

Zypr fits in with my vision of where APIs are going, because Zypr is doing the same thing as aggregation, automation and other trending service providers, but the end goal is this use case is voice. In Zyprs own words:

Zypr aggregates proprietary 3rd party APIs, categorizes their functions, and then presents those functions through a single, normalized API. By aggregating and normalizing 3rd party APIs, Zypr creates a stable access point for devices and apps to access those services without concern for service and API changes.

That sounds exactly like what Singly is doing, but with voice as the vehicle for making valuable API resources avilable on apps running via mobile phones, tablets and in our cars and homes. I really like the Zypr graphic. I will have to create a similar version to articulate some the API trends I’m seeing. 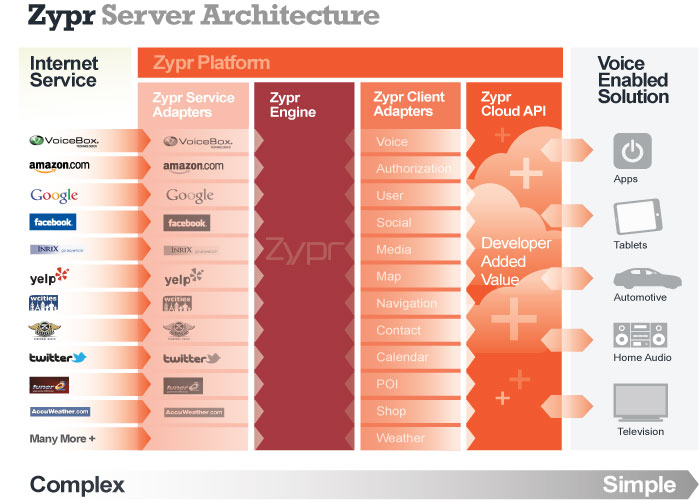 I hope Zypr is just heads down, working hard on their platform. According to my API stack rank, there aren’t very many positive signals coming out of the platform:

What Zypr is doing is important--I hope they have enough runway to make happen.  If they need to cut corners, they shouldn't replicate the service or client adapter portion of their platform, they could just partner with an existing API aggregators like Singly for these layers, as well as reciprocity providers like Elastic.io or Foxweave to migrate and tranform data.  In my opinion Zypr should focus on how their engine works, and partner and generate open source to build the rest.

Personally, I would like to see more competition in the space of API driven voice enabled architecture. So far I haven’t found any other players doing it at the same level as Zypr. Let me know if you know of something. Siri is going to need some healthy competition.