The Next Iteration of Government Data 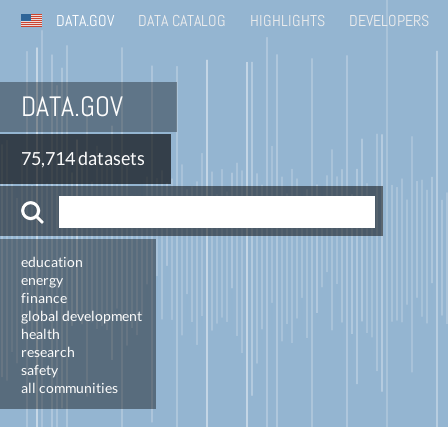 Our federal government is working on the next iteration of Data.gov, and just published a first look at what is being called Next.Data.Gov. This next version is meant to build off the momentum of the recent open data policy, which is looking to embed open data practices across our federal government, changing the way it operates.

To plan for the next iteration of Data.gov, the General Services Administration (GSA), a handful of Presidential Innovation Fellows, and OSTP staff studied usage patterns from the last version, and discovered that people were hungry for more examples of how government data is used. Equipped with this understanding, they are making sure the next version included a communication stream that will enable each data community to communicate how datasets are being used and making an impact.

Beyond the approach to requirements gather, responsive design and adopting open source tools, what I think is the most important aspect of Next.Data.Gov is that the planning, design and deployment process is open and collaborative--which has the potential to alter how our government conducts business on a daily business.

The next iteration of OUR federal government data portal is being planned publicly using Github, Quora and Twitter. Historically much of our government planning process is done behind closed doors, by government agencies, with the assistance of contractors. The innovation I'm seeing come from washington in the form of Open Data Policy, Healthcare.gov and now Next.Data.Gov makes me very optimistic for the future of how our government works, and I am honored to be going to DC to help.

If we can tackle the process of opening up government, agency by agency, project by project, make the process as open and collaborative as possible, we will be able to tackle this together. These sites, applications and platforms are not just using open data, open APIs and open source--the process for planning, deployment and management is an open, collaborative process between government, private sector and the public.

Make sure and get involved, it is up to all of us to make sure this works.