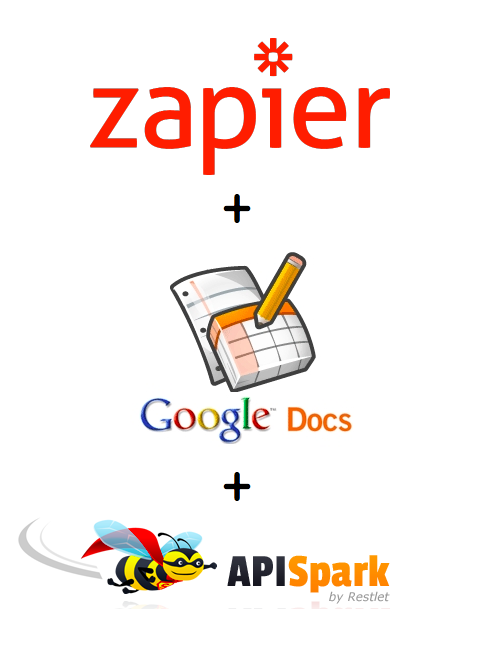 I’m exploring different ways that APIs can be deployed, with an emphasis on deployment by non-developers. There are numerous cloud services available, that allow non-developers to execute common business tasks like registration forms, surveys, payments, and product sales, and when you combine these business functions with Zapier, Google Docs and APISpark—you can deploy an API, no code skills required.

This story begins with the ability to deploy an API from any Google Spreadsheet using APISpark, putting API deployment within the grasp of the average business user. Next, I want the easiest possible way to get data, from multiple sources, into a Google Spreadsheet? Answer: Zapier (or other reciprocity provider, like IFTTT).  To support this, I started looking through the numerous Zapier recipes, that allow my me to publish results to a Google Spreadsheet—there are 167!

The most obvious data source I see is Twitter. Everyone time there is a Tweet from specific user, or from a specific Twitter search, you can have it published to a Google Spreadsheet, and when you have that spreadsheet connected to an APISpark API, the results will be automatically available via API.

The second most common source of data I see, would be cloud based forms. I see providers like Wufoo, Gravity Forms, and JotForm, to name a few, that allow you to submit form submissions to any Google Spreadsheet, and with the APISpark integration, all your form submissions are automatically available via API.

After that, I see numerous commerce, payments, and other key business functions, that Zapier enables publishing of data and content into a Google Spreadsheet from. All of these services have APIs, that is why Zapier is able to do what they do, but that would require a developer to tackle with custom API integration (not for this story). This story is all about enabling non-developers to deploy APIs, from common business functions, no coding necessary--Zapier is our middleman.

Beyond Twitter, forms, payments, and product sales, I will explore other easy to implement, API deployment using Zapier, Google Docs, and APISpark. These represent API deployment scenarios I don't think people are tracking on, and with a little education, I think we can bring problem owners up to speed, and increase the number of APIs available, driven by average person, and the common business problems they face every day.