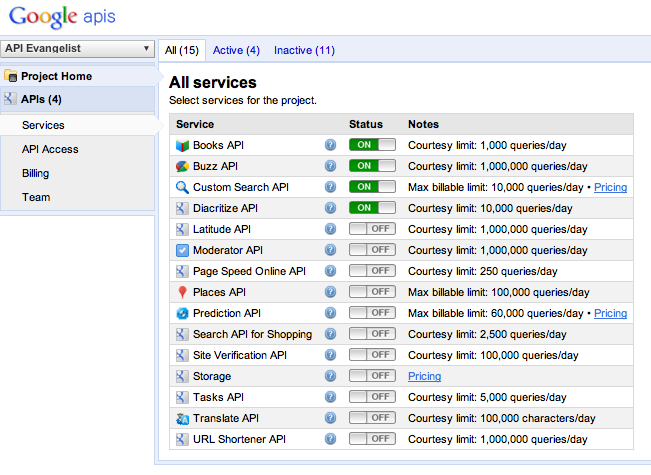 I was writing a story for ProgrammableWeb tonight on the enhancements Google made recently to its API console.

I hadn't properly covered the API Console, API Explorer here on API Evangelist, so I took the time, played with more, and wrote up overviews for each.

I noticed something while reviewing Google's recent efforts to organize their family of 88 APIs, and make it easier to discover, integrate, and manage for developers.

Google is taking a similar approach to managing their APIs, as Apigee, Mashery, and 3Scale does for other API providers.

Apigee, Mashery, and 3Scale provide a wealth of knowledge when it comes to API deployment that very few companies can touch.

Beyond expertise, they provide a set of common building blocks every API should offer. These are tools like forums and blogs you can find elsewhere, but these API service providers deliver in a neat bundle ready to go for your API.

But the real value they bring to the table, that you can't really find anywhere else is:

And Apigee has one other piece that Mashery and 3Scale do not. They have an API Explorer.

Google provides an API Explorer, and they have open sourced the code, and made it available at Google Code.

Next the Google API Console delivers billing and traffic controls, if this set of tools were made open source, this would be huge for the API community.

I've been a big proponent of the need for open source API building blocks. I say this not to devalue what Apigee, Mashery, and 3Scale bring to the table. Their stuff rocks. However there are many other API owners out there who aren't ready for a service like theirs, or can't afford, and a set of open source building blocks is needed.

So I guess I'm saying to Google, Please open source your API Console, like you did the API explorer. It will benefit the community a great deal, we will deal with API analytics next.