Infochimps has delivered a new Geo API that brings together geographic data from multiple sources, connects it with a standardized schema, and delivers it to developers through a single API.

When pulling geo data from APIs, developer may not always get the most complete data, but they just deal with it, because we don't always have the time to pull data from multiple APIs. InfoChimps does this for developers, making it possible to have the best data from many sources.

Once InfoChimps downloads the data from multiple sources, they tie the data together, making relationships and connections between disparate data, using the Infochimps Simple Schema (ICSS). So no matter what the original data source is, there is a consistent, complete and expressive description of a collection of related data its associated assets. 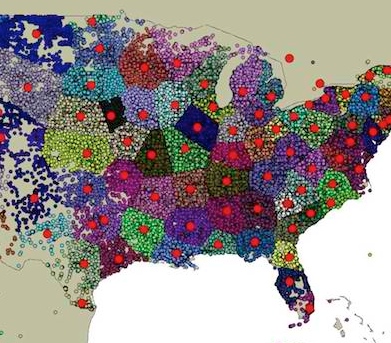 InfoChimps doesn't stop at downloading and standardizing access to this geo data, they also tackle displaying potentially large volumes of data. When you look at data from a large geographic region, the amount of data to display for users can very large. Developers are faced with questions of how to group and summarize for display. The Infochimps Geo API provides a summarizer feature that will group data based on intelligent clusters, making the data easier to display, and more meaningful.

Next InfoChimps also provides multiple ways to query geo data, allowing developers to query based upon latitude and longitude, as well as other geographic locators like street address, bounding box or any dimension that can be mapped back to a location. This type of geo data querying opens up a whole new ways for developers to empower their users to discover. 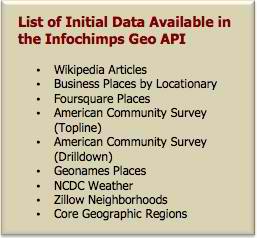 Then if aggregating from multiple sources, providing a standardized schema, intelligent summaries, and multiple query options wasn't enough, they are also pushing the traditional notions of what is geo data. They've included Wikipedia articles as sources, and opened up the possibility for tying any data set to a location, using the Infochimps Geo API.

InfoChimps approach to the Geo API, shows they just get it. They aren't just pushing data sets via an API because data is valuable, like I see with other data marketplaces and API providers. They are actually solving data problems for developers and actually enriching our mobile and web apps with quality geo data, and making a better user experience.