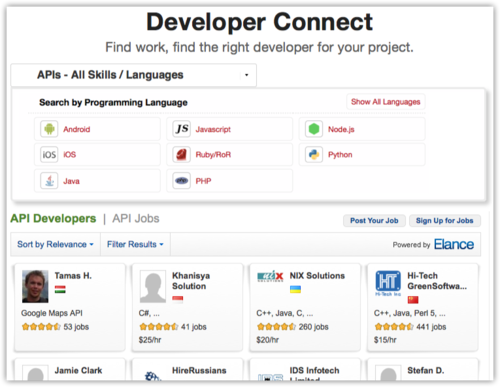 One of the biggest areas around APIs I think needs attention in 2012 is more tools that focus on developers. There are plenty API services and tools focusing on API owners, but we need to start making sure developers are taken care of.

There are plenty of developers out there who have polished their skills working with specific APIs, either on production, or hobby development projects, and would love to find freelance work, and make some money of their talent.

On the flip-side, there are plenty of companies looking to build web and mobile applications that use one or many APIs, and would prefer to contract with developers who already have experience with those APIs.

Its a win-win situation for developers, API owners and companies looking to build on top of APIs. I think it is also a sign that the API space is really maturing. With platforms like Mashery’s Developer Connect, powered by Elance, developers may now be able to make a good living specializing in API development.

Its a great idea, I wish I had come up with it! Oh wait. I did!! In fall of 2010, and pitched it to Elance, after pitching the idea, I even built a Elance Developer Area prototype, and did a four part series on the potential.

I actually don’t have a problem with this, I thoroughly enjoy my ideas getting used, rather than sitting on the back burner. What did piss me off, is when I was offered the exclusive by Elance after they actually built their version...they sent me a Techcrunch post, saying here is your exclusive.