Learning from Sqoot: Making Hackathons Accessible to EVERYONE!

Boston API Jam organizer Sqoot just got themselves into a lot of hot water with some very sexist comments on their hackathon home page (now removed): 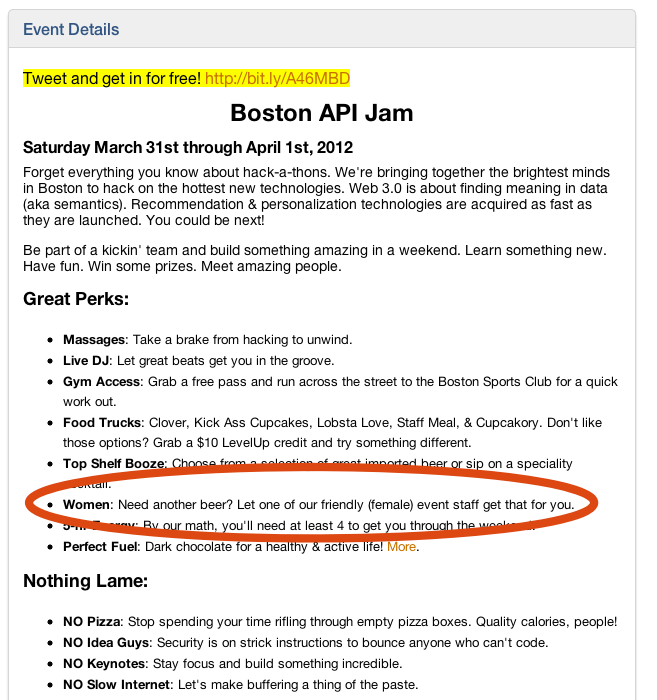 From what I can tell, Sqoot was called out by @BoazSender:

Then the pressure quickly was put on in the Twittershpere:

Resulting in Apigee pulling their sponsorship:

And Heroku pulling theirs as well:

"While we thought this was a fun, harmless comment poking fun at the fact that hack-a-thons are typically male-dominated, others were offended."

Their "apology" definitely summarizes the misogynistic tone of the spreading Silicon Valley startup and hackathon culture.

This is a major problem. One of my biggest complaints about many hackathons is that they are male dominated, and this is nothing to joke about, make fun of or take lightly. You don’t realize it when all you do is attend the all boy hackathons and do your bro-gramming.

I’ve been to hackathons where there are equal sexes, and they are awesome-- way more fun, and truly work to solve real life problems, not perceived problems.

I hope other blogs will publicize this, and make other hackathon organizers aware so this kind of shit doesn’t not only go away, but we start working the other direction and making sure EVERYONE feels welcome at hackathons.