Those of you who follow my blog, know my favorite API management service provider is 3Scale. It’s no secret I’m a fan of what they are doing. We share a vision of the API space and what a healthy API industry will look like.

In support of that vision, 3Scale just launched a new open source API proxy build on the NGNIX web server technology--a move, I feel is important for 3Scale, as well as the entire API industry.

What makes 3Scale’s approach signficant, is that by deploying the NGNIX proxy, API providers don't need to rely on proprietary API proxy solutions, while also gaining additional benefits, such as acess to a library of 3rd party addons and modules available in the NGNIX ecosystem. All while employing an established technology that has been proven to deliver in highl volume production environments.

In addition to the benefits provided by NGNIX, the proxy provides seamless integration with 3Scale’s API management platform that delivers: 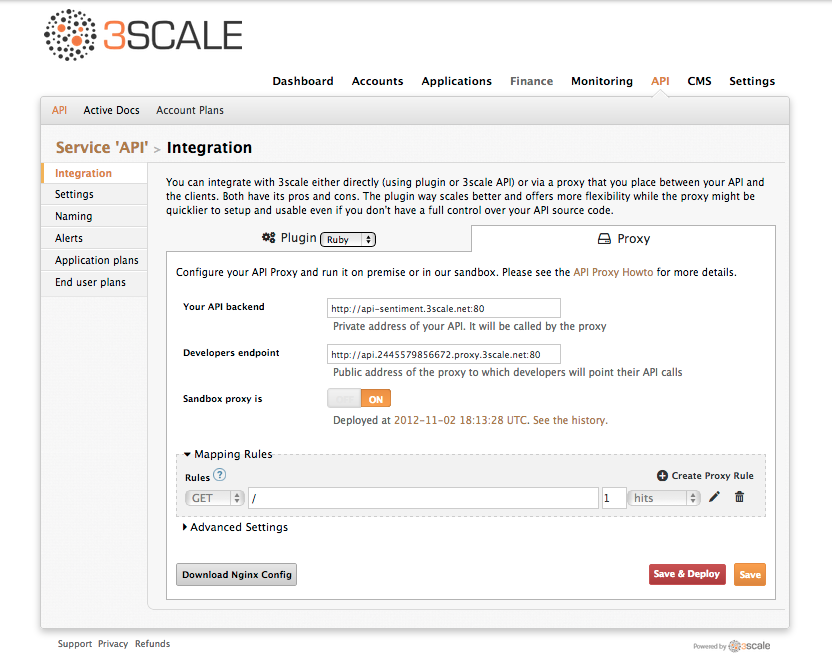 This list represents everything you will need to get your API up and running. 3Scale enables you to do this both on premise or in the cloud, using a proxy that you cotrol--then alllowing you to choose which 3Scale API management services you need to use. But what is most important for me, is 3Scale allows you start off without spending any money. 3Scale has a free, entry level tier that will allow you to design, experiment and iterate until you find the meaningful API definition that works for your developers--at which time you can scale, paying for only what you need, as you grow.

This approach is critical to success of individual APIs as well as the overall health of the API industry. We need to allow companies to innovate without spending a fortune, give up control of their data, and being locked into unnecessary commitments--allowing the industry to go from thousands of APIs to millions of APIs as quickly as possible.

“As of today this makes 3scale the API Management solution provider with the richest and most flexible set of technical options to manage API traffic,” said Guillaume Balas, 3scale CMO. “At 3scale we want companies with great and valuable APIs to be able to distribute them easily, rapidly, without hampering the economics of their API project and without disrupting their existing infrastructure: this what 3scale’s API Management solution provides.”

The 3Scale approach is in aligment with my industry philosophy, that we shouldn’t stand in the way of API providers with costly, proprietary proxies. We should leverage existing, proven, open technologies like NGINX to allow API providers to deploy wherever their infrastructure exists, either in the datacenter or the cloud--while enabling them to “connect” to the best of breed API management services, which allow them to scale, grow and evolve their API ecosystem in the healthiest way possible.