While writing about the history of APIs, it is easy to be so focused on just APIs, that you overlook the single most important player in the entire history of the web API--ProgrammableWeb.

In July 2005, John Musser started ProgrammableWeb. According to his original about page: 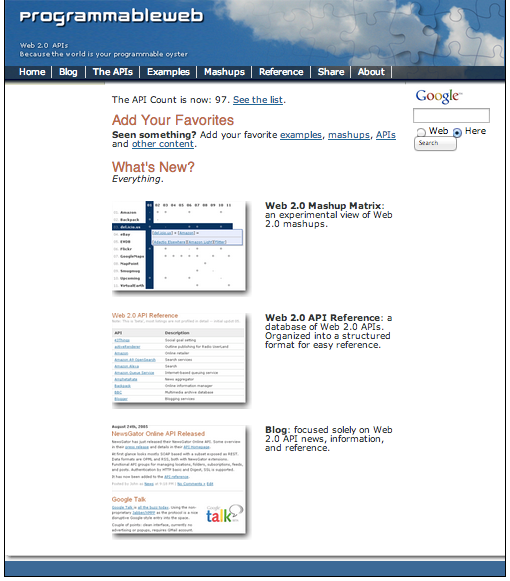 ProgrammableWeb is a web-as-platform reference site and blog delivering news, information and resources for developing applications using the Web 2.0 APIs.

I started this site because I couldn't find what I was looking for: a technology focused starting point for web platform development. (For a bit more see my initial post.) Although no guarantees, the last time I started a reference site it somehow became Google's highest rated link on the topic. Given that this site will be a collaborative effort with community input as well, this can be what we make it.

I hope you find the site useful.

I think John’s original blog post on why he started ProgrammableWeb, says it all: Why? Because going From Web Page to Web Platform is a big deal.

Web APIs are a big deal! Whether its social networking, government, healthcare or education--having a programmable platform to make data and resources available will be a critical part of how commerce and society operates from here on forward.

John made a early decision to showcase open and RESTful approaches to deploying APIs vs. parallel attempts of Service Oriented Architecture(SOA) and Web Services, and focused on telling stories about open APIs--way before it was the thing to do in Silicon Valley.

When I started API Evangelist in July 2010 (5 years after PW), and started talking about the business of APIs, the technology of web APIs was already widely accepted in Silicon Valley, because of the stories John Musser and Adam Duvander have told on ProgrammableWeb.

As we close 2012, a year in which I think we can confidently say APIs are moving mainstream, and I feel we owe much of the success to ProgrammableWeb. The stories John, Adam and other writers have been telling on ProgrammableWeb have been crucial to quantifying and defining the API industry--allowing us all to build, iterate and move things forward. Without stories around the technical, business and politics of APIs, these virtual interfaces would not have been able to find a place in our real life worlds.

Thanks John, Adam and ProgrammableWeb, for telling the stories that got us here.