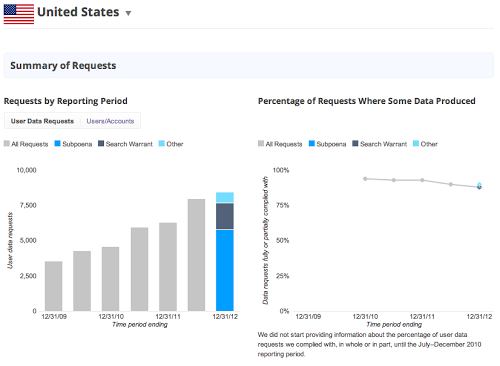 Google released an update to the Transparency Report today, showing information regarding government requests for users' data on the Google Network.

Google's transparency report proves details on Government requests including who they come from, where the requests originate, types of requests and other critical information about how our government monitor us citizens and ultimately the entire world online.

There are stories on other blogs that state Facebook and other platforms should follow Google's lead with transparency reports of their own. I agree. We will never see our government mandate industry leaders to do this, so us people have to lobby corporations to follow Google's lead.

I see this type of transparency being critical to any company claiming they have an "open platform" or "open APIs". I will be adding transparency report to my list of legal building blocks for all API owners.

As more and more of our world, economy and daily lives moves online and are transmitted via APIs, investigations by our legal system and government are only going to grow. We need to establish a way to report on these inquiries in real-time and in an open way like Google has been doing for two years now.