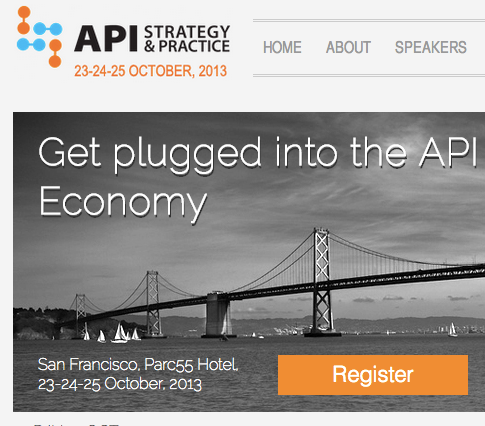 I'm pretty excited about the lineup we've managed to assemble including keynotes from Pamela Fox (@pamelafox) from Khan Academy, Daniel Jacobson (@daniel_jacobson) of Netflix, Wynn Netherland (@pengwynn) from Github and Kristin Calhoun (@KCalhoun) the director of the Public Media Platform, just to name a few of them.

We've worked hard to put together sessions that would speak to all aspects of the API space including creation, design and documentation of APIs, API discovery, hypermedia APIs, API testing & debugging, API marketing & evangelism and business models. The goal was to cover topics from basic to advanced, while covering APIs from start to finish.

I'm particularly stoked about the location of the conference. It is right downtown at the Parc55 Hotel, easy walking distance to and from anything. I always hate conferences that are off the beaten path, and Parc55 will make it easy to hang out and eat, drink and network around the event before and after.

The New York City edition of #APIStrat back in February was sold out with over 350 people in attendance. San Francisco is also on track to be sold out, this time with over 600 people in attendance. Steve Willmott(@njyx) of 3Scale and I have a blast MC'ing the entire event and facilitating the API conversations, both business and technology, and gearing up to make sure #APIStrat flows.

Make sure and GET REGISTERED. It was painful to turn away everyone last time, and I'd hate for you to not be able to get in. It is going to be an informative three days with the people who make the API space move forward. I look forward to seeing you there.