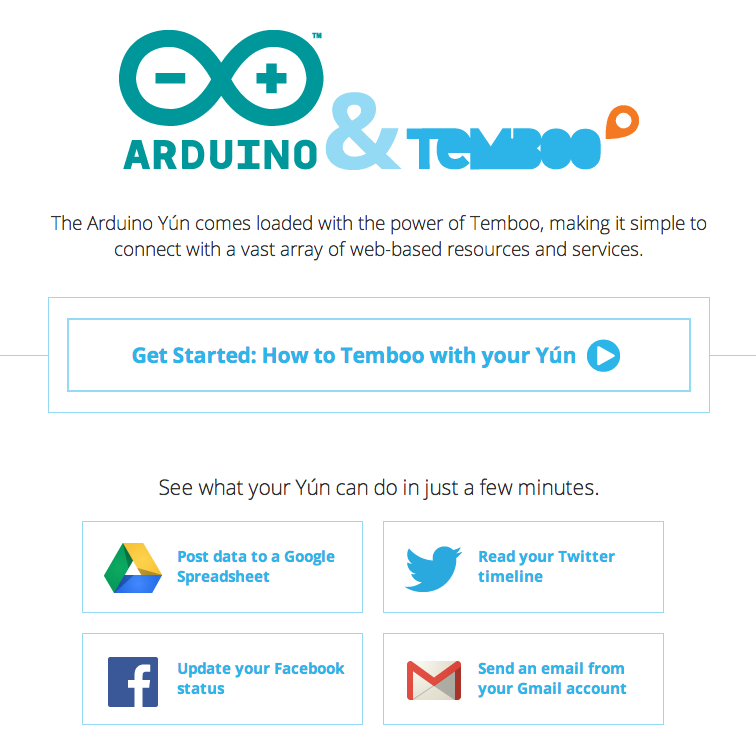 One of the areas I track on is what I call the API reciprocity space, which is all about interoperability between platforms, but I label it reciprocity as an attempt to capture that it isn’t just about old school Extract, Transform, and Load (ETL) of the old days—today it is about ETL in the cloud, plus adhering to the intent of not just platforms, but the users interest as well.

When thinking of API reciprocity, think If This Then That (IFTTT), Zapier and Temboo. I’ve been watching Temboo evolve with their API driven, platform to platform solutions, but I’m really interested in there latest moves to support web platforms to the Internet of Things using the Arduino platform, specifically using the Arduino Yún micro controller board.

Temboo has been working hard recently to connect the Arduino Yún to over 100 web-based resources and services like Facebook, Twitter and Dropbox. The Arduino Yún gives you connectivity to lights, motion, sound, temperature and other sensor based devices, and Temboo provides the connectivity between these sensors to the numerous API driven resources in the cloud.

Taking it to the next level, Temboo has released Sketch Builder, an application that allows anyone to design interactions between Arduino Yún and Temboo enabled cloud services. This opens up this type of Internet of Things to web service interaction design, development and deployment to anyone, not just developers.

APIs are moving forward at a very rapid pace, and as we move from the mobile era of APIs into the Internet of Things phase of APIs, the pace is going to quicken. APIs aren't just about social, cloud and mobile anymore—innovators like Temboo at bridging all of the APIs driven platforms we depend on, to our physical world via sensors.