Help Improve This Content: Another Reason To Deploy API Developer Area on Github 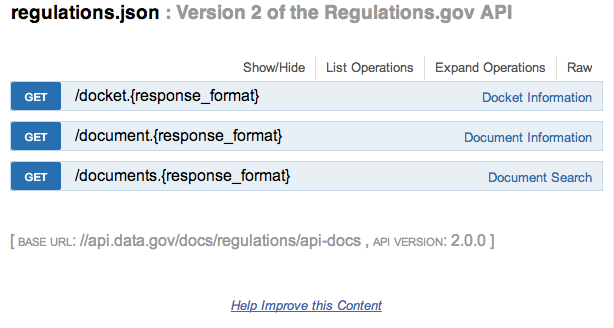 I just published a post showcasing Socrata's use of Github to deploy their new open data and API developer portal. There are numerous reasons for using Github as part of your API management strategy, with one of the main reasons being the collaborative features that Git, and the social coding platform Github introduce.

I've had the news about Socrata’s new developer portal open for over a day now, and what triggered that story was seeing a link to the regulations API on data.gov, which not only just uses Swagger for the API definition, it employs a simple portal that is deployed using Github pages.

Deploying API developer areas on Github, using Github pages is nothing new, we've been doing it a while now. However there is a groundswell within federal government recently, so I think its worth noting—hoping other open data and API folks in government jump in too!

I like the basic layout of the regulations API portal. It is a simple overview, changelog, terms of service and interactive API documentation using Swagger. Then demonstrating one of the biggest benefits of deploying your developer portal on Github, it simply says: “Help Improve This Content”, directing users to edit, fork and submit a pull requests on the portal’s Github repository—enabling anyone to improve the portal content, with the approval of the API administrator of course.