I’ve had the pleasure of watching Romain Huet (@romainhuet), developer evangelist at Twitter, give his very entertaining talk three times now, and if you haven’t seen it, I recommend looking it up on the APIStrat Youtube channel. Romain walks us through the world of Twitter, showing us the power of the platform and its API, but the really entertaining part is the two Internet of things (Iot) demos that he executes during his talk.

The first demo Romain does, is taking an audience selfie using a Raspberry Pi driven camera, triggered by a Tweet. The second demo involves flying a quadcopter drone on stage, that uses NodeCopter as the interface, and Twitter as the communication layer. Both demos are crowd pleasers, which makes for not just an entertaining talk, but shows the potential of Iot + APIs, while also making the audience part of the experience.

I think the demos that Romain delivers are important, because they offer a unique learnng gateway to both Iot and APIs. While Twitter as a communication layer for the Internet of things may not be a scalable, production ready solution for talking to devices, I think it is a great learning platform for individuals to learn not just about APIs, but how APIs can be used to communicate with the devices in their world. 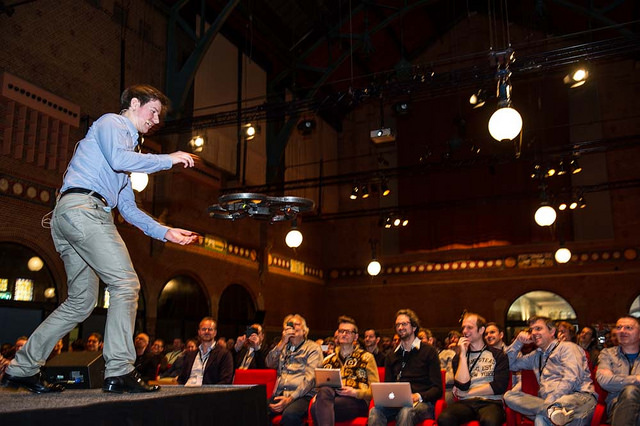 Simple Communication
Twitter is a simple communication platform, which posseses a social graph that is easy to understand by people who are new to the world of APIs. When individuals are experimenting with both APIs and Iot, Twitter provides a great 101 level sandbox to learn from fun, simple, meaningful IoT + API tutorials.

Simple API
The Twitter API is very mature, providing a simple, yet robust communication API to jumpstart their education. The overhead to get up and running on Twitter API by new users is very low, and with simple tutorials based upon demos like Romain’s selfie photo, and drone, the platform provides a great sandbox for experiencing these IoT + API interactions.

Public And Social By Default
Twitter is a public communication channel. Sure you can use DM’s between users, but Twitter is open and social by default, and excellent introduction to the importance of security and privacy in the world of Iot. Users will immediately be faced with questions of messages being public, who will see, and how your devices will have to communicate in this open environment.

Twitter As Stepping Stone
When it comes to Iot communication, Twitter is not a scalable solution, however it is an excellent stepping stone. Not all users who engage with Iot + API tutorials will need to scale their implementation. This approach to learning about IoT and APIs is just be a stepping stone, giving new users an API 101 introductory course on how devices like Raspberry Pi, Nodecopter and other IoT devices operate—where they go next is up to them.

As part of the API 101 work I’m doing with 3Scale, I will be exploring other API 101 tutorials for consumers, hoping to provide easy to follow resources that can help anyone understand how APIs work. Not all the examples will be Iot related like Romain’s--I will be working on examples in multiple categories, based upon conversations I’ve had with other API teachers from across the space.