First, I want to clarify that when I started API Evangelist in summer of 2010, I spent a lot of time trying to create a logo, resulting in me creating this temporary (5 years) logo, that you have seen on my t-shirts for the last five years. 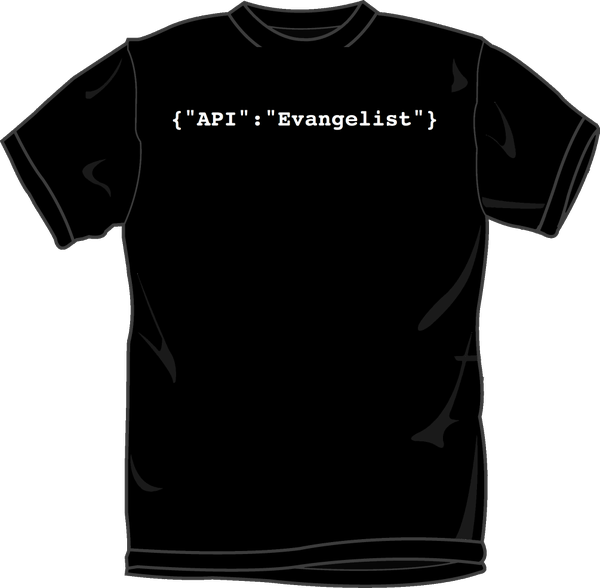 After listening to Mike spin his yarn, I'm convinced that the next wave of growth for API Evangelist has very little to do with me, and my brand, than it does with the rest of the API community. I've spent a lot of time sharing stories, but for us to get to the next level, it has to be about the community sharing its stories, or we will never get to the scale all of us API delusionaries envision.

To support this vision, I'm going to play with a new logo for API Evangelist, and print up a round of t-shirts with this evolution of the logo. 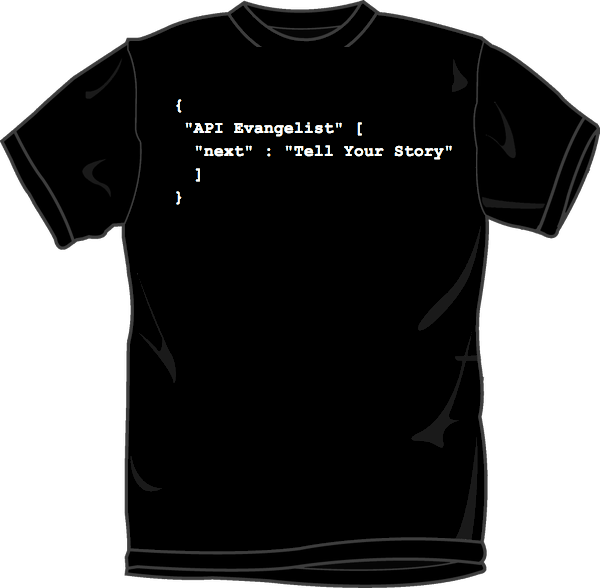 I know I'll get a lot of flack from the restarfarians, and hypermedia folks about the design, but it is more about the storytelling, than it is about being technical, but in my opinion, they both work in concert. I've often answered, when people ask me what is scale for API Evangelist, that it is about having hundreds of people doing what I do, across many business sectors, around the globe--this new design reflects that.

While this is a marketing effort for my brand, it realyy is about the next phase of growth for the space. To get to that API economy thing we are all showcase across the space, we are going to need API Evangelists to step up and own each sector, region, and country around the globe. API Evangelist isn't something that can scale as a business, it will take people who are passionate to step up in their industries and regions, and help evangelize APIs in a way that isn't about products, but about ideas, stories, and the people and brands who make things go around.

I'll let you know when t-shirts are avaiable, if you'd like to have one let me know, but in exchange you have be the evangelist that is needed in your area--otherwise you will have to wear the reqgular conference schwag you get at conferences and hackathons. ;-)