Regarding The Solicitor General Weighing In On The Oracle v Google API Copyright Case: Are You Really Surprised They Do Not Get APIs? I Am Not! 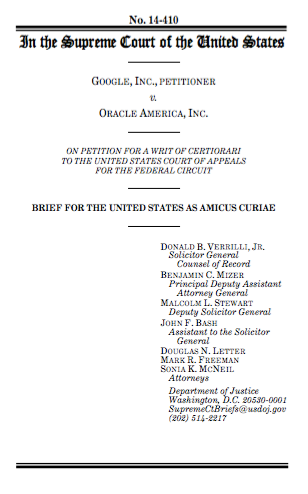 My first emotion after reading the brief filed by the US Solicitor General, is that the federal government's stance is so wrong, antiquated, and shows how behind the curve our government actually is when it comes to the unfolding API economy around us. Then as with each moment in the past, associated with this very important legal case, I become tangled in the web that is politics and intellectual property (IP) law in our country--leaving me confused, betrayed, and embarrassed for the industry that I take pride in being a champion for. It is easy to get caught up in the page view buzz, emotion, and hype of each of these episodes, but in the end I will just keep fighting for open API patterns, and Oracle's damaging stance, and the fact the federal government is a revolving door for industry, really is just par for the course--business as usual.

This is not the first time, nor will it be the last time, that someone who does not understand APIs will be making laws that regulate how things work in industry. What is really frustrating is that this isn't just a single court case, it sets a very dangerous precedent that will impact every business sectors. Think of the role the web plays in our lives in 2015, and how important companies like SalesForce, eBay, Paypal, Amazon, Google, Twitter, and Facebook have been to the economy--you just dealt a potentially lethal blow to the next wave of these companies even existing, good job US government. The Solicitor General has no idea of the separation in the API layers, but most of the API industry doesn't see it as well, so why would I be surprised that the government isn't up to speed.

Honestly, I cannot argue this case anymore. I do not believe in the bullshit rhetoric in the defense of IP in a digital age, I'm sorry. I'm overwhelmed making sense of the actual reality of the API space, let alone when framed in the context of what everyone owns, who started something first, who has the legal resources to defend (or attack) -- something that actively works against the interoperability that enables the API economy. I cannot allow myself to get bogged down in the legal quagmire that is copyright and patents, when it comes to APIs. Like many other aspects of our world it isn't about right or wrong, open or proprietary, this is about having the resources to be at the table. Period. I am also looking at you Google. Intellectual property is not a poor man's game, or even a slightly well to do man's game--it is a power that the business giants wield to get what they need done--take a look at the companies who have API related patents currently to see who has the power.

In the year since I launched API Commons I've come to realize that most of you in the API space would rather keep the design of your API close to your chest, because your VCs told you to, or maybe you think that somehow, someday it will be your golden ticket--forget the larger API community. Similar to the menu sitting on the table at your restaurant, the naming, and order, and design presentation of your API means very different things than you think they do, in reality it is all about the delivery behind this set of instructions, and the overall execution of your platform.

Intellectual property laws exists because the space is full of vultures and zombies, and while it may provide some defense for a handful of artists or companies, in the end it really protects those who know how to, and those who have the resources (and fortitude) to wield it. In this new digital world, success is about the widest people possible audience understanding the naming, order, and design of your APIs, not limiting this! Try to scale your restaurant chain without a menu, or suing everyone who has a menu similar to yours, and we aren't even discussing with the critical nature of interoperability which makes APIs a thing, going well beyond what a restaurant menu does. In a digital age you want EVERYONE understanding and re-using the pattern you have designed is essential, not a negative.

This latest flareup in the Oracle v Google case is just a reminder of the larger disease that is government procurement and our IP system, and the federal government is just responding to the powers who are yanking their chain (follow the $$ behind the affordable care act, for a sampling of this). The US Supreme court hasn't even made their decision, the Solicitor General is only keeping things in line with the wider objectives of the administration. This is how power flows, and people are influenced. Oracle, the White House, and even Google do not understand the wider implications of what they are doing, they are just responding as they do, to get the results their constituents desire (no, not you).

Ok, enough bitching. What do we do? We keep on, keep'n on. If you understand the difference between your API and your API design / definition, take a stance--put into the API Commons. If you feel your API definitions are copyrightable, license it API CC-BY or CC0, if you feel your API design is code, the apply an MIT or Apache license, either way make sure people can reuse as they need. I am not saying copyright and patents should be applied--I am not pro copyright or patent. As I do with much of the API space, I'm just acknowledging the best past forward in the fucked up world we have created for ourselves. The problem with taking this stance, is you still have to have the resources to defend and police whichever position you take. Go ahead and copyright your API design, and patent the API process you deliver, and enjoy defending in court, and policing on the web, rather than actually running your APIs. This is the wonderful API economy we are building for ourselves, a world where us smaller people get to "do", and deliver on meaningful ideas, and the people who have the power will ultimately own the exhaust from all our hard work at some point, either through investment, acquisition, or litigation and regulation--it is inevitable.

I just can't help but think that in this digital age, the copy / paste world we live in now, the only defense we have is  doing, and staying ahead through meaningful action and leadership. The patent system cannot keep up with the pace of change in the API economy, and copyright has to be viewed very differently, this is why we have Creative Commons, something we desperately need for the patent life cycle. This recent brief filed by the Solicitor General is  very misguided and damaging, Oracle is hurting their future business with such a short sighted view of the Java API, and I  can't keep defending Google on this, or argue within the schizophrenic realm of intellectual property in a digital age. I will keep an eye on it, and undoubtedly have opinions along the way, but I insist on being a lubricant for the API economy, not spending my time being distracted by concepts of IP.

I'm just going to keep building, doing, and sharing the best API stories and patterns I can find. I hope you do as well.