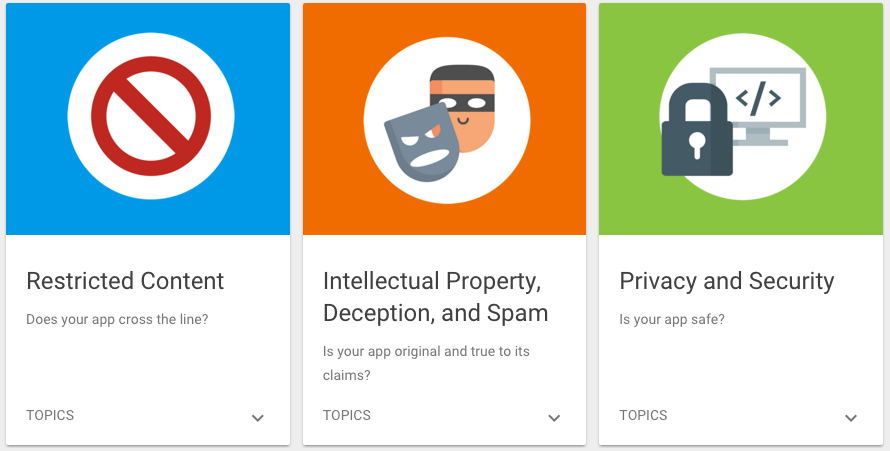 The NextWeb had a great story today that Google has redesigned its developer policies with clearer language and visual examples, and normally I don't jsut parrot what the tech blogosphere publishes, but it's an important enough API message, I think it warrants repeating. In my experience, API providers just emulate what they hear in the space, and stories like this need amplifcation.

What Google did isn't rocket surgery, they just simplified the legalize around what they expect of developers. What better way to actually help ensure these best practices around the platform actual happen, then by actually providing simple titles, summary description, images, and other relevant links, on a developer policy page. In most scenarios developers aren't malicious, they are just usually ignorant of the best practices that often exist in the platforms legalize we agree to, but seldom ever read.

My friend Tyler Singletary (@harmophone) stated that, "the organization here for policy is fun, mostly clear, and interactive. A company the size of Google distilling the deep TOS policy into such a user and developer friendly front end is pretty astounding.” -- I agree. Simple like this, when you operate at Google scale can be pretty hard, and is somthing I'd love see standardized across Google offerings.

I will be adding any of the elements from the simplified Google Play developer policy that are missing in my API terms of service, privacy, licensing, and branding research. I will also add the concept of having visuals for each area, or building block, and add the common them of "keep it simple", helping API providers remember that they actually want developers reading and understanding this stuff, not having it buried in the legaleze that nobody will give shit about.