That Thing You All Are Doing With Slack Integrations, @Blockspring Is Doing It With Spreadsheets 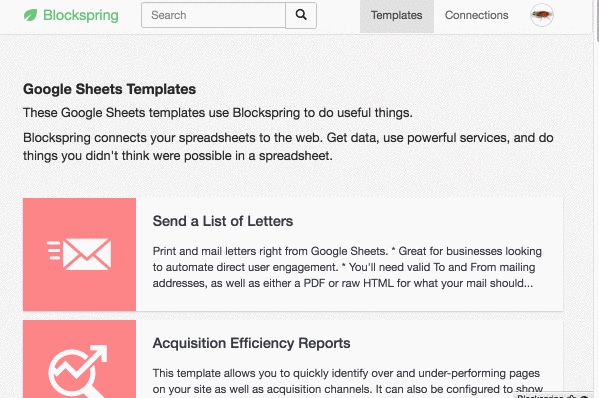 One common thing you hear from the growing number of integrations and bots that are leveraging the Slack API, is all about injecting some specific action into the platform and tooling, we are all already using. Startups like Current, who are providing payments within your Slack timeline, use the slogan, "transact where you interact". I began to explore this concept, in what I call API injection, and is something I'm sure I'll be talking about over and over in the future, with the growth in bot, voice, and other API enabled trends I am following.

The concept is simple. You inject a valuable API driven resource, such as payments, knowledge base, images, video, or other, into an existing stream, within an existing platform or tool you are already putting to use. It is not a new concept, it is just seeing popularity when it comes to Slack, but really has been happening for a while wit Twitter Cards, and chatbots who have been around for some time.

I'm seeing another incarnation of this coming from my friends over at Blockspring, who I've showcased for some time, for bringing valuable API resources to spreadsheet users. Blockspring just released Google Sheets Templates, which enables your spreadsheets to "do useful things", and "get data, use powerful services, and do things you didn't think were possible in a spreadsheet." Instead of Slack being the "existing tool", it is Google Spreadsheet, but the approach is the same -- bring useful API driven resources to users, where they are already existing and working.

As I continue to watch the latest bot evolution, a stark contrast has emerged between the types of bots we've seen between Twitter and Slackbots--a contrast I feel is being defined by the tone and business viability of each platform. Twitterbots are much more whimsical and about stories, poetry, and other information, where Slack is very much productivity, and business focused, making it a prime target for the next wave of startups, and VCs.

I think there is a big opportunity to deliver valuable API resources into the timeline of Slack users. I think there is an even bigger opportunity to deliver valuable API resources into the worksheet of the average business spreadsheet user. The problem is that these opportunities also means there will be a significant amount of crap, noise, and pollution injected into these channels. I'm just hoping there will be a handful of providers who can do this right, and actually bring value to the average Slack, as well as the every day spreadsheet worker -- you know who you are.