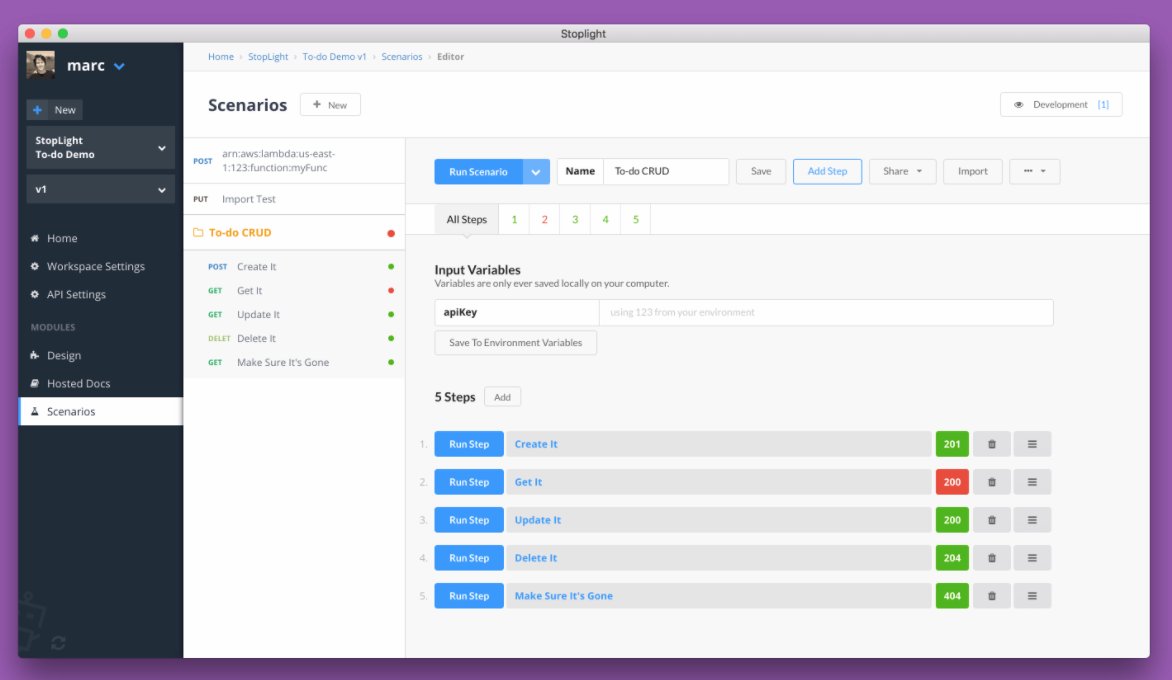 There aren't too many startups doing interesting things in the API space right now. One of the exceptions is Stoplight.io. I am working really hard to find some of the good things in the API space to focus on, in hopes of not being too dark with my writing, after the election. Stoplight's new Scenarios is something new, something progressive, and I think could have a larger impact down the road--making it worth covering here on API Evangelist.

Stoplight Scenarios is billed as "Test, automate, and debug web APIs + AWS Lambda". You can make API and AWS Lambda calls, and test, automate, and debug the responses -- pretty standard stuff we are seeing across several API service providers. Where it gets interesting for me is that you can daisy chain these requests together into a variety of scenarios. You can do this with a single API, or you can do it across a variety of disparate APIs--making for some pretty valuable "juju" in my opinion.

As I am learning about a new API, I am often frustrated by having to connect the dots between many different paths, adding, then pulling, then updating, and other common "scenarios" I will want to accomplish. I would love for API providers to do this heavy lifting for me, and provide me with a variety of the common scenarios I need as an API consumer to get up and going. This is just the local possibilities around using scenarios, I'll explore the possibilities between many distributed APIs in future posts.

If you haven't played with Stoplight before, I recommend heading over there. Their API design, definition, mocking, and documentation tooling is leading edge stuff in the world of APIs right now. The Stoplight Scenarios just ups the value their platform brings to the table, continuing to make them on of the few bright spots in the API world for me these days. Let me know what you think after you play with more.