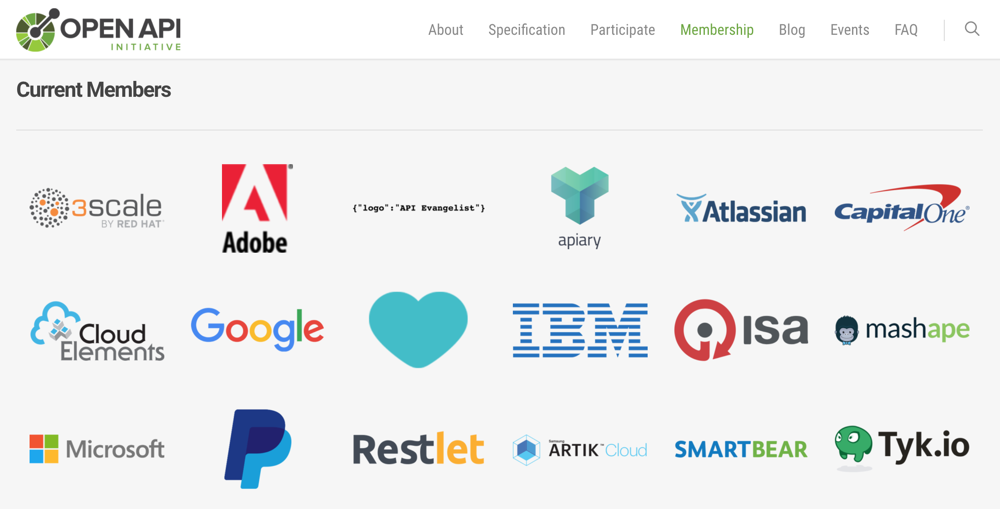 It was an interesting journey getting the API specification formerly known as Swagger into the Linux foundation last year. After SmartBear donated the spec to the newly formed Open API Initiative, I was considering joining the governing body behind the spec, but with all I had going on last year, I didn't feel it was the right time. Participating in governance groups hasn't really ever been my thing, and there are a handful of large organizations involved, and who am I really? I'm just a single person ranting about APIs. However, in 2017 I am changing my tune and will be joining the Open API Initiative (OAI)

It is an important time for API definitions, and there is a lot riding on the success of OpenAPI, as well as API definitions in general. I feel like we need as many voices at the table as we possibly can. We need government agencies, enterprise, small businesses, startups, and individual analysts like myself. I feel pretty strongly that API definitions should be openly licensed, accessible, and following the most commonly used patterns available to us across the API sector. We don't need to all be speaking a different language when it comes to deploying compute resources or working with images, and API definitions are how we get there.

After a ramping up period, I will work with OAI on their marketing strategy, helping tell stories, and learn about interesting implementations and use cases when possible--dovetailing nicely with what I am already doing. I'll be tuned into the conversation about the spec, but will definitely be standing off to the side as an observer for quite some time. I'm pretty stoked with what they've done with version 3.0 of the spec, and at this point, I have a lot to learn before I open up my mouth and chime in on anything. I'm just enjoying watching the personalities play out in the Slack room--this stuff should be a reality TV show, but that is another story.

It makes me happy to be part of the Open API Initiative (OAI). As I work on my regular API Evangelist research, and move forward projects like Open Referral, and their Human Services Data Specification (HSDS), the OpenAPI Specification is critical to everything I am doing. The OAI is extremley important right now, and I'm pleased to have a seat at the table of such an important organization, and learning from the other smart folks moving the specification forward. 2017 will be an interesting year for not just the OpenAPI Spec, but for all the services and topen tooling that is being built on the spec, as well as the wide range of industries being touch by APIs, and putting common API specifications, and schema to work.