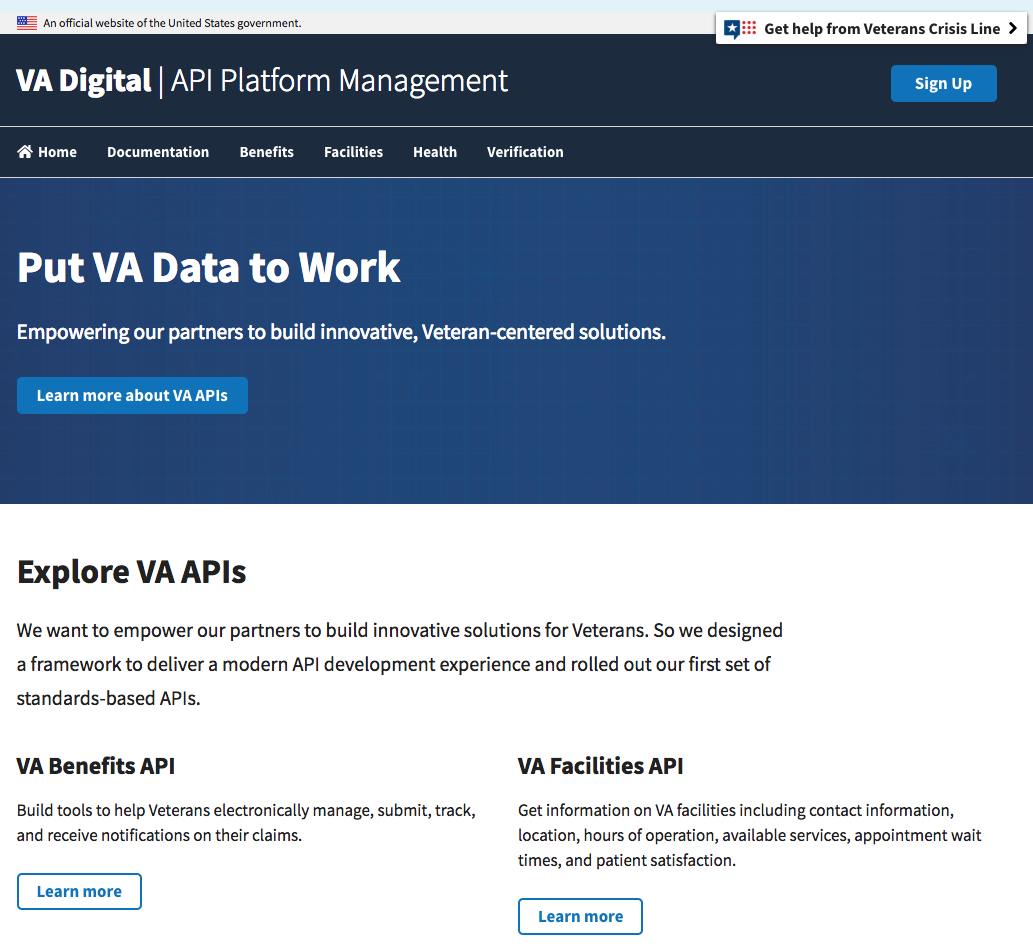 I have been working on API and open data efforts at the Department of Veterans Affairs (VA) for five years now. I’m passionate about pushing forward the API conversation at the federal agency because I want to see the agency deliver on its mission to take care of veterans. My father, and my step-father were both vets, and I lived through the fallout from my step-fathers two tours in Vietnam, exposure to the VA healthcare and benefits bureaucracy, and ultimately his passing away from cancer which he acquired from to his exposure to Agent Orange. I truly want to see the VA streamline as many of its veteran facing programs as they possibly can.

I’ve been evangelizing for API change and leadership at the VA since I worked there in 2013. I’m regularly investing unpaid time to craft stories that help influence people I know who are working at the VA, and who are potentially reading my work. Resulting in posts like my response to the VA’s RFI for the Lighthouse API management platform, which included a round two response a few months later. Influence through storytelling is the most powerful tool I got in my API evangelist toolbox.

This Is An Amazon Web Services Opportunity
The most popular story on my blog is, “The Secret to Amazon’s Success–Internal APIs”. Which tells a story of the mythical transition of Amazon from an online commerce website to the cloud giant, who is now powering a significant portion of the web. The story is mostly fiction, but continues to be the top performing story on my blog six years later. I’ve heard endless conference talks about this subject, I’ve seen my own story framed on the wall in enterprise organizations in Europe and Australia, and as a feature link on internal IT portals. This is one of the most important stories we have in the API sector, and what is happening at the VA right now will become similar to the AWS story when we are talking about delivering government services a decade from now.

The VA Is Going All In On An API Vision
One of the reasons the VA will obtain the intended results from their API initiative is because they are going all in on APIs across the agency. The API effort isn’t just some sideshow going on in a single department or group. This API movement is being led out of the VA’s Digital Innovation center, but is being adopted, picked up, and moved forward by many different groups across the large government agency. When I did my landscape analysis for them, I scanned as much of their public digital presence as possible in a two week timeframe, and provided them with a list of targets to go after. I see the scope of the results obtained from VA landscape analysis present in the APIs I’m seeing published to their portal, and in development by different groups, revealing in the beginnings of an agency-wide API journey.

The Use Of developer.va.gov Demonstrates The Scope
One way you can tell that the VA is going all in on an API vision, is their usage of the developer.va.gov subdomain. This may seem like it is a trivial thing, but after looking at thousands of API operations, and monitoring some of them for eight years, the companies, organizations, institutions, and government agencies to dedicate a subdomain to their API programs are always more committed to them, and invest the appropriate amount of resources needed to be successful. These API leaders always stand out from the organizations that publish their API efforts as an entry in their help center or knowledge-base, or make it just a footnote in their online presence. The use of the developer.va.gov subdomain demonstrates the scope of investment going on over at the VA in my experience.

The VA Is Properly Funding Their API Efforts
One of the most common challenges I see API teams face is the lack of resources to do what they need to do. API teams that can’t afford to deliver across multiple stops along the API lifecycle, cutting corners on testing, monitoring, security, documentation, and other common building blocks of a successful API platform. Properly funding an API initiative, and making it a first class citizen within the enterprise is essential to success. The number one response an API platform gets rendered ineffective is due to a lack of resources to properly deliver, evangelize, and scale API operations. This condition often leaves API programs unable to effectively spread across large organizations, properly reach out to partners, and generate the attention a public API program will need to be successful. From what I’ve seen so far, the VA is properly funding the expansion of the API vision at the agency, and will continue to do so for the foreseeable future.

The VA Is Providing Access To Meaningful API Resources
I’ve seen thousands of APIs get launched. Large enterprise always start with the safest resources possible. Learning by delivering resources that won’t cause any waves across the organization, which can be a good thing, but after a while, it is important that the resources you put forth do cause waves, and make change across an organization. The VA started with simple APIs like the VA Facilities API, but is quickly shifting gears into benefits, veteran validation, health, and other APIs that are centered around the veteran. I’m seeing the development of APIs that provide a full stack of resources that touch on every aspect of the veterans engagement with the VA. In order to see the intended results from the VA API efforts, they need to be delivering meaningful API resources, that truly make an impact on the veteran. From what I’m seeing so far, the VA is getting right at the heart of it, and delivering the useful API resources that will be needed across web, mobile, and device based applications that are serving veterans today.

There Is Transparency And Storytelling
Every one of my engagements with the VA this year has ended up on my blog. One of the reasons I stopped working within the VA back in 2013 was there were too many questions about being able to publish stories on my blog. I haven’t seen such questions of my work this year, and I’m seeing the same tone being struck across other internal and vendor efforts. The current API movement at the VA understands the significance of transparency, observability, and of doing much of the API work the VA out in the open. Sure, there is still the privacy and security apparatus that exists across the federal government, but I can see into what is happening with this API movement from the outside-in. I’m seeing the right amount of storytelling occurring around this effort, which will continue to sell the API vision internally to other groups, laterally to other federal agencies, and outwards to software vendors and contractors, as well as sufficiently involving the public throughout the journey.

Evolving The Way Things Get Done With Micro-Procurement
Two of the projects I’ve done with the VA have been micro-procurement engagements: 1) VA API Landscape Analysis, and 2) VA API Governance Models In The Public And Private Sector. Both of these projects were openly published to GitHub, opening up the projects beyond the usual government pool of contractors, then were awarded and delivered within two week sprints for less than $10,000.00. Demonstrating that the VA is adopting an API approach to not just changing the technical side of delivering service, but also working to address the business side of the equation. While still a very small portion of what will be needed to get things done at the VA, it reflects an important change in how technical projects can be delivered at the VA. Working to decompose and decouple not just the technology of delivering APIs at the VA, but also the business, and potentially the internal and vendor politics of delivering services at scale across the VA.

The VA Has Been Doing Their API Homework
As of the last couple of months, the VA is shifting their efforts into high gear with an API management, as well as an API development and operations solicitation(s) to help invest in, and build capacity across the agency. However, before these solicitations were crafted the VA has been doing some serious homework. You can see this reflected in the RFI effort which started in 2017, and continued in 2018. You can see this reflected in the micro-procurement contracts that have been executed, and are in progress as we speak. I’ve seen a solid year of the VA doing their homework before moving forward, but once they’ve started moving forward, they’ve managed to be able to shift gears rapidly because of the homework they’ve done to date.

Investing In An API Lifecycle And Governance

I am actively contributing to, and tuning into the API strategy building going on at the VA, and I’m seeing investment into a comprehensive approach to delivering all APIs in a consistent way across a modern API lifecycle. Addressing API design, mocking, deployment, orchestration, management, documentation, monitoring, and testing in a consistent way using an OpenAPI 3.0 contract. Something that is not just allowing them to reliably deliver APIs consistently across different groups and vendors, but is also allowing them to develop a comprehensive API governance strategy to measure, report upon, and evolve their API lifecycle and strategy over time. Dialing in how they deliver services across the VA, by leveraging the development, management, and operational level capacity they are bringing to the table with the solicitations referenced above. This approach demonstrates the scope in which the VA API leadership understands what will be necessary to transform the way the VA delivers services across the massive federal agency.

Providing An API Blueprint For Other Agencies
What the VA is doing is poised to change the way the VA meets its mission. However, because it is being done in such a transparent and observable way, with every stop along the lifecycle being so well documented and repeatable, they are also developing an API blueprint that other federal agencies can follow. There are other healthy API blueprints to follow across the federal government, out of Census, Labor, NASA, CFPB, FDA, and others, but there is not an agency-wide, API definition driven, full life cycle, complete with governance blueprint available at the moment. The VA API initiative has the potential to be the blueprint for API change across the federal government, becoming the Amazon Web Services story that we’ll be referencing for decades to come. All eyes are on the VA right now, because their API efforts reflect an important change at the agency, but also an important change for how the federal government delivers services to it’s people.

I am all in when it comes to support APIs at the VA. As I mentioned earlier, my primary motivation is rooted in my own experiences with the VA system, and helping it better serve veterans. My secondary motivation is all about contributing to, and playing a role in the implementation of one of the significant API platforms out there, which if done right, will change how our federal government works. I’m not trying to be hyperbolic in my storytelling around the VA API platform, I truly believe that we can do this. As always, I am working to be as honest as I can about the challenges we face, and I know that the API journey is always filled with twists and turns, but with the right amount of observability, I believe the VA API platform can deliver on the vision being set by leadership at the agency, and why I find this work to be so significant.