There is a lot of discussion around the growth of APIs, and what the future will look like. How will we discover and make sense of the number of available APIs, and quickly get to work integrating with the APIs that bring the most value to our apps and businesses.

One technology that comes up in every conversation I’ve had is Swagger. What is Swagger?

The goal of Swagger is to enable client and documentation systems to update at the same pace as the server. The documentation of methods, parameters and models are tightly integrated into the server code, allowing APIs to always stay in sync.

Swagger was born out of initiatives from Wordnik, developed for Wordnik’s own use during the development of developer.wordnik.com. Swagger development began in early 2010 and the framework being released is used by Wordnik’s APIs, which power both internal and external API clients.

Swagger provides a declarative resource specification, allowing users to understand and consume services without knowledge of server implementation, enabling both developers and non-developers to interact with the API, providing clear insight into how the API responds to parameters and options.

I’m familiarizing myself with the specification more and playing with the various tools they provide: 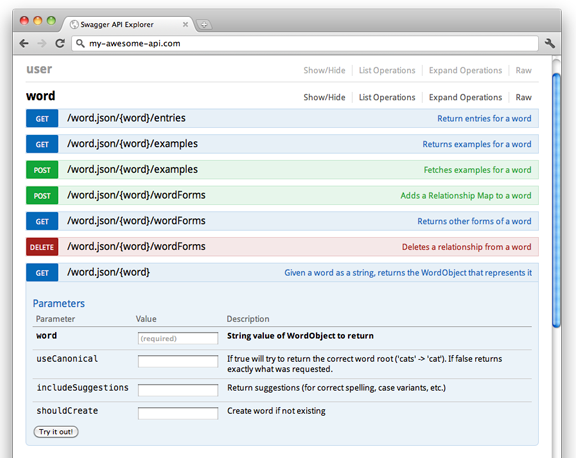 I understand that Swagger is not the one specification to rule all APIs, and it won’t make all religious API fanatics happy. But I want to start somewhere. I see three main benefits for API owners coming from adopting Swagger:

I believe strongly that consistent documentation and code samples ensure an API will get used, but as the number of APIs grows, a system like Google API Discovery Service, will be essential for API adoption across industries and around the globe. I’m hoping to learn more about Swagger, and see if it can help deliver on this vision.

Updated November 27, 2015: Links were updated as part of switch from Swagger to OADF (READ MORE)