ProgrammableWeb says Google has 94 APIs. I roughly count about 75 going through Google Code. I’m more concerned with public web APIs, and Google has Android, Chrome and other non-web APIs, so its hard to tell.

In any case I would consider Google to the largest public web API owner around. I don’t think any other single provider, owns the number of, as well as size of public APIs, that Google does. As with any leading API providers I think there is a lot to learn in studying their approach to API deployment and management.

With this in mind I wanted to take a look at the Business of Google APIs in 2011 as one of my year-end, API reflection posts. I think there are some important lessons to be learned from the work Google did over 2011, to get their API business in order.

Google was already setting the theme for 2011, with the launch of Google Console in November 2010. The Google API Console helps developers manage their Google API usage across all of thier sites and apps. It was clear, Google was not just looking for a way to get a handle on how they deploy and manage large numbers of APIs, they were acknowledging developers needed a way as well.

Google API Console centralized how developers managed the Google APIs they used, traffic generated via these APIs, introduced billing management for some APIs, and provided developers with project and team building tools.  Google supports 30 APIs inside of the API Console now.

Now developers can integrate Google API discovery into client libraries, IDE plugins and other tools, making it easier to discover the API they need. After providing an API discovery service, Google followed another 2011 trend around deploying the Google API Explorer.

Like other API explorers, Google API Explorer allows users to make calls and explore REST APIs using a web interface, allowing anyone to start using an API without writing any code, even when authentication using Basic Auth or OAuth is required.

API explorers have done a lot to improve the time it takes for developers to get up and running using an API, but nothing beats good quality code samples, and Google put some serious effort into standardized code samples that can be used across Google APIs, in multiple programming languages:

Beyond making it easier to discover, explore and manage APIs with Google Discovery, Google Explorer and Google Console in 2011, Google also spent a lot of time addressing API security. 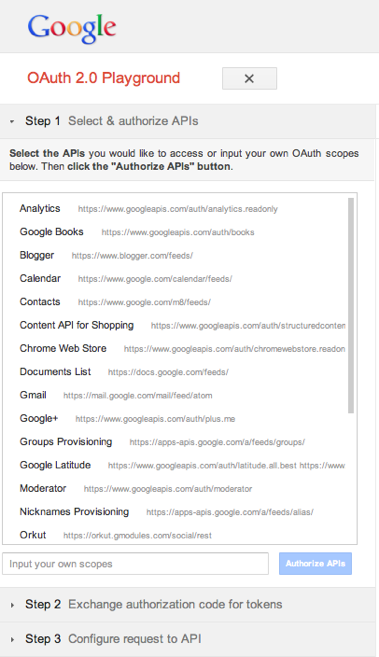 The first step to improving the security of Google APIs was by supporting SSL across all Google APIs. Next Google went all in by not just working to support OAuth 2.0 across Google APIs, they want to help developers understand OAuth 2.0, making it easier to secure applications with the standard. To help facilitate this understanding, Google opened up the OAuth 2.0 Playground, which is meant to simplify experimentation with the OAuth 2.0 protocol and APIs that use the protocol by developers.

With these moves by Google in 2011, I think we can say that SSL support and OAuth 2.0 are two API security essentials that are here to stay. After working on security, Google moved into the legal department with the introduction of a single Google APIs Terms of Service.

Overall Google made some pretty significant improvements to get their API house in order. Of course in order to do this they also had to make some hard decision, like deciding to shut down 18 Google APIs in May, which included the Google Translate API. A decision they reversed two months later, when they decided it was better to offer Google Translate as a billable API under Google Console.

As the API Evangelist I don’t really invent any of the API approaches I write about, I try to shed light on what others are doing. Thats what this post is all about, shedding light on how Google is conducting the business of their APIs, so we can learn from them-- the good and the bad.

I think its important to remember that we are all making this shit up as we go along, of course it should be based on some experience, but ultimately we are in some seriously new territory, and even some of the biggest players in this space fumble the ball. This fact became painfully clear in an accidental post by Googler Steve Yegge, shedding light into the API strategy of not just Google, but also Amazon.

So what do I take from Google’s approach to APIs in 2011?

A lot of this is what we already are seeing from API service providers in the space like 3Scale, Apigee, Atmosphere and Mashery. But, what I don’t see, is anyone addressing discoverability, easy legal and centralized billing, management and reporting from a developers perspective.

Google is addressing all of this because its in their best interest for ALL developers to be successful, where API service providers tend to focus on the success of developers who use their client APIs, not ALL developers.

Well, maybe in 2012 a service provider can step up with a solution that help developers discover and manage their business and legal across “ANY” API, or maybe Google can open the doors to any API provider to use the Google API platform as part of any Google Apps account?