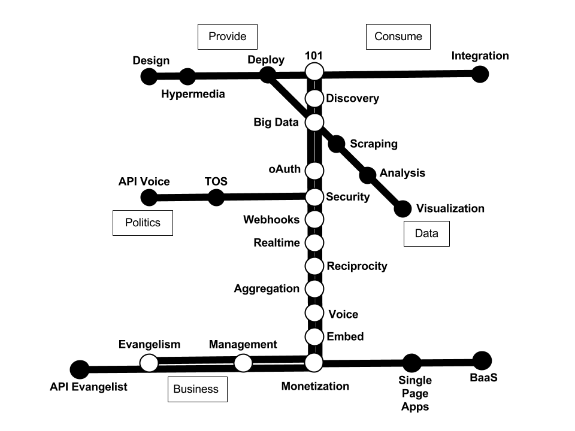 A long time ago I defined the API Evangelist network using a subway map format, plotting out the different routes you could take, and the locations all along this journey. As with anything I do, this is a work in progress, and I’m needing to regularly update this map. Currently it is in an image, and I use an image mapping tool to generate the links—something that is very time consuming.

I think the subway map is an important metaphor for understanding some potentially complex ideas, and provide a single map, complete with legends, supporting content, and links to more details. My problem is I have several maps I need to create, and maintain on a regular basis. Ideally my subway mapping tool would be dynamic, allowing me to make changes as I went along.

While looking for a solution, I stumbled across Subway Map Visualization jQuery Plugin, by Nik Kalyani. This plugin would work perfectly for what I wanted to do to visualize the API Evangelist network, but I had another project I wanted to do, in which it somewhat fell short in satsifying.

I’m still playing with what is possible, but my new Subway Map API allows you to generate maps, adding routes, and locations along the routes. The API just takes advantage of all the features that Nik Kalyani added into the plugin, I just provided web APis for them. This project will be changing fast, and I will be resetting the database regularly, so if you play with it, make sure and let me know, so I don't step on your toes.