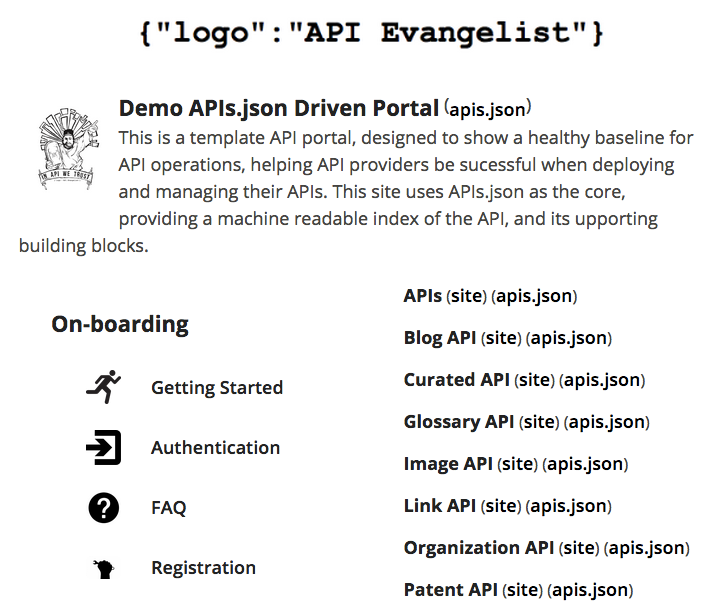 I wrote a post the other day laying out what I'd consider a minimum viable footprint for API operations. My vision of just exactly what an API is, has gone beyond just the technical, ever since I started API Evangelist back in July of 2010. Early on I saw this was more than just about the API endpoints, and documentation, code samples, and many other building blocks were essential to the success (or failure) of any API platform, area, or ecosystem.

This recent post was an attempt, here in 2015, to quantify what I would consider to be a minimum definition for API operation. After writing it I wanted to take another stab at actually creating a portal, that would stand up to the API rhetoric that I regularly produce. What better place to start, than my own personal master API stack, where I am working to get control over my own infrastructure. Once I got a version 1.0 definition, I forked it, and setup a default API portal that I am calling my demo APIs.json driven portal.

I have published to Github, a version of my minimum API footprint, which I'm using APIs.json an engine. After looking at 10,000K+ APIs, I have a pretty good idea of what I like to see. This is my interpretation of all that monitoring of the space--a distillation of what I've seen while reviewing APIs. It isn't perfect, but neither is the space that we have, and my portal is just an attempt at quantifying what I'm seeing.

I'm going to create a minimum viable Internet of Things (IoT) version of this portal as well, and use APIs.json to deploy different interpretations of what constitutes a minimum viable API presence. If you have anything you'd like to see in my base template, let me know. If you want to fork and add to, then submit a pull request, even better. I'm just playing around, but also looking to establish a suite of APIs.json driven tools, that help me(and you), better understand the API space.

To help on-board you with my vision, I also added a walk-through for when you land on the site. Something I will be adding to when I have time.