Parse Shutting Down: Maybe We Should Lower Our Expectations Of Tech Just A Little Bit 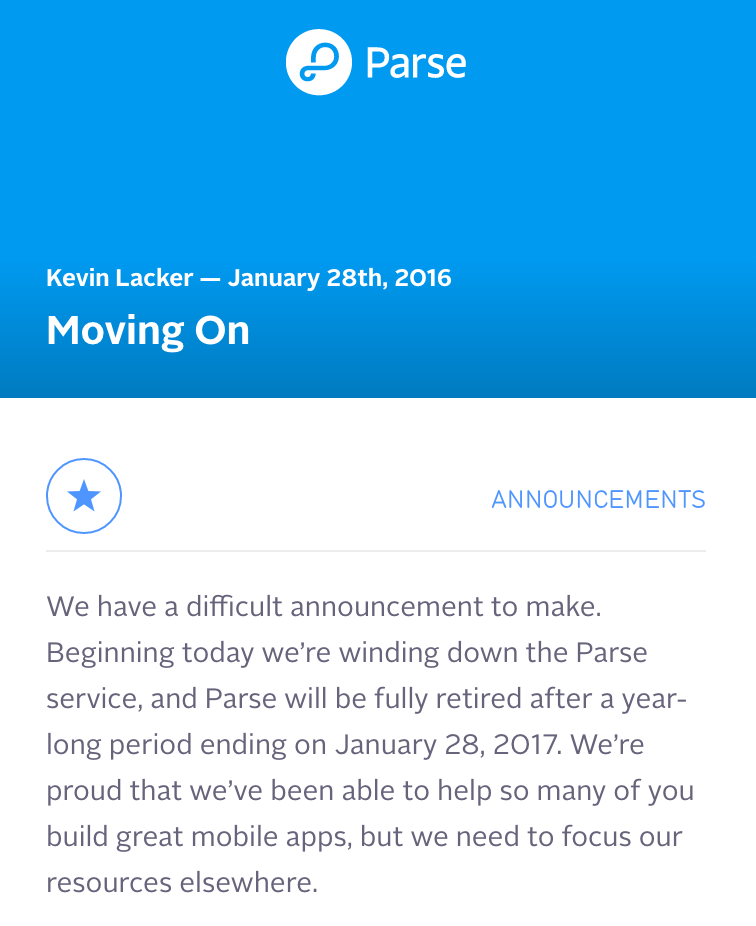 The mobile backend as a service (MBaaS) platform Parse is shutting down. I started tracking on Parse as part of my BaaS research a couple years back, something that resulted in having all of the BaaS providers, including Ilya Sukhar (@) of Parse, on stage at @APIStrat NYC in early 2013--this conversation was just a couple months before Parse was acquired by Facebook.

Parse was widely consider to be the top BaaS platform, which resulted in wide adoption, something that I'm sure grew expoentitally after the purchase by Facebook. Parse is giving everyone a year to migrate, providing a database migration tool, as well as open sourcing a version of the platform. Which I think is a pretty fair deprecation strategy for customers, even with the unexpected news.

Despite the tec highway is littered with these types of acquisitions, and deprecations, the tech blogosphere, and social bookmarkosphere (is that a word?), loves to sqawk when these happen. Competitors like AWS, Google, and others love to invite you to come use their platform, and the technorati love to point out how you cannot depend on any platform--which is the truth.

Personally, I enjoy taking these moments to explore why the space think technology is such an asbsolute, where these ways of thought rarely exist in other sectors. I think there are a couple distinct things at play:

As I've stated in earlier posts, there are no guarantees your vendors will will always be there in other business sectors, what the hell makes us think our tech vendors will always be there? There is no basis for believing a platform or API will ALWAYS be there, no matter what you are promised. Companies go out of business, get acquired, and in this fast paced tech climate, companies are always looking to deliver the latest product, and features. Everything in the space points to disruption, change, and evolution, where the hell did we get the idea these services shouldn't go away?

I think the tech blogosphere, social bookmarkosphere, and startup elite and belivers should lower our expectations of technology just a little bit. ternet outages, acquisitions, and roadmap shifts will always happen--seems to me, these are the only constants! As a small business operator (I am not a startup), I am constantly evaluating what my Plan B, C, D, E, and even F is. While I may not always be prepared for changes in the landscape, rarely you will catch me squawking too loudly, as I'm business executing on the next stage of my evolution.

However, you will hear me exploring, and understanding these topics, as they occur--because that is fun, and educational!