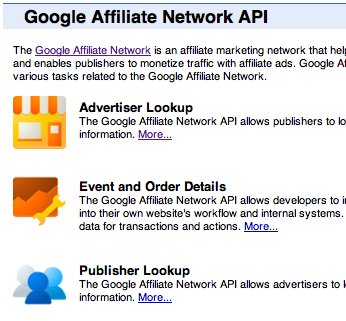 The Google Affiliate Network is the affiliate network, formerly known as Doubleclick Performics, which was part of Google’s Doublick acquisition in April of 2007.

I need to play with the network more to understand how it works from both an advertisers and publishers perspective.

It looks like an interesting addition to the suite of publishing, advertising and revenue generating tools from Google like Google Analytics, Google Adwords, Google Adsense and Google Webmaster Tools.