I started playing with the possibilities when it comes to API deployment using virtual containers like Docker early this year, exploring the constraints this approach to API deployment introduced, on my own infrastructure. The process got my gears turning, when it comes to deploying very simple data, content, and algorithmic APIs into any environment that runs Docker.

As 2015 has progressed, I'm seeing containers emerge as part of more stops along the API life-cycle, specifically in deployment and virtualization. A new one that just came across my radar is API PLUG. I haven't played with the containerized API deployment solution yet, but after watching video, and looking through site it seems in line with what I'd expect to see from a next generation, containerized, API deployment solution. 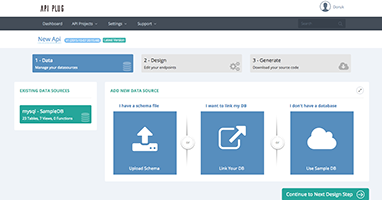 Overlapping with my previous post on reconciling API orchestration, I'm seeing several stops along API lifecycle present in API PLUG, beyond just API deployment, it allows you to design, deploy, and document your API which moves well into the world of API management. As I'm seeing with other emerging solutions like API Studio from Apigee, I predict we will see testing, monitoring, and other critical layers of the API life-cycle emerge as orchestration layers of API PLUG.

I've added API PLUG to my API deployment research, and I am still considering the best way to include them in other areas of my API research. I'm increasingly finding that modern API management solutions are spanning multiple areas of the API life-cycle, which further encourages me to modularize my research, but also tells me I'm going to need to create some sort of Venn Diagram visualization to help me better understand the reach of emerging API products and services.

Anyways, more to come on API PLUG as I play with, and listen to the stories they tell via their blog, Twitter, and Github accounts (I can only find a Twitter account, but I'm sure they are working on that! ;-).