It’s been a long, long road for Twitter when it comes to realizing the importance of having a plan when it comes to their API management strategy. Aside from monetizing the firehose through former parter, and now acquired solution Gnip, Twitter has never had any sort of plan when it came to providing access tiers for their API. I try to revisit the Twitter developer portal a couple times a year, but I’m going to have to increase the number of visits as there seems to be more rapid shifts towards getting control over their API management layer in recent months.

The API plan matrix that has emerged as part of Twitter’s pricing page provides a view of the unfolding plan for the social media platform. 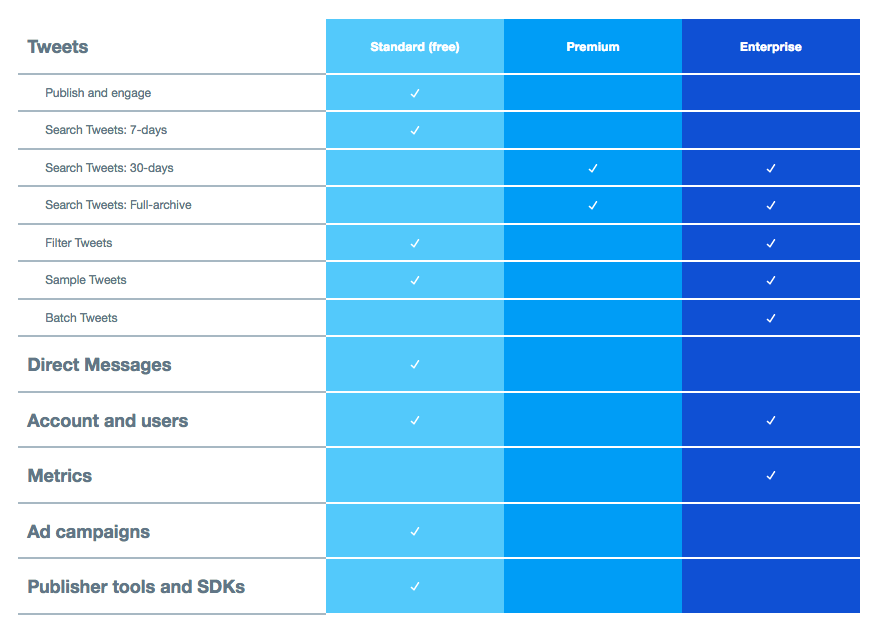 The Twitter API plan doesn’t show the entire scope, as it doesn’t cover the streaming layer of the API, but it does provide an important first step towards bringing coherence to how developers can access the API, and pay for premium levels of access. This conversation isn’t just about Twitter making money or Twitter charging for access to our data, this is about Twitter taking control over who has access to our data, and the platform. It is up to Twitter whether or not they focus on revenue, or the needs of end-users, something that we will only realize as their API plan continues to unfold.

This is the layer where Twitter will begin to reign in bots, and other malicious activity, but it is something that won’t be easy, and undoubtedly cause a lot of pain and frustration for developers, and end-users. It is something they should have done a long time ago, but as we are seeing play out with Facebook, to incentivize the growth their investors and shareholders desired, these platform needed to look the other way at the API management layer. To achieve the eyeballs, clicks, and engagements they desired, it required them to ignore harassment, bots, and other forms of abuse that occurs. Twitter is different than Facebook, because it is primarily a public platform, but the lack of a plan at the API management layer, has had a similar impact.

I’ll keep an eye on where Twitter is headed with all of this. While I’m concerned for how they’ll prioritize the needs of end-users and developers, It makes me happy to see them putting a plan in place at the API management level. Twitter has operated for too long without a plan, and without a clear path for serious applications built on the platform to grow and evolve. I’ll keep an eye out for continued examples of Twitter restricting access to our own data, and call them out when they lean to heavily towards revenue generation. While it is a decade too late, I have to commend them for putting their API plan in place, and begin the messy work of reigning in API access to the platform.