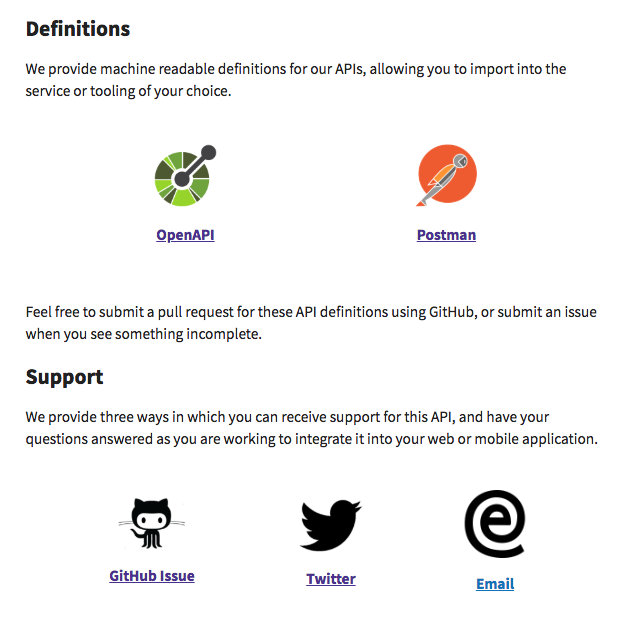 I was taking a look at the Department of Veterans Affairs (VA) API documentation for the VA Facilities API, and intending on providing some feedback on the API implementation. The API itself is pretty sound, and I don’t have any feedback without having actually integrated it into an application, but following on the heals of my previous story about how we get API developers to follow minimum viable API documentation guidance, I had lots of feedback on the overall deliver of the documentation for the VA Facilities API, helping improve on what they have there.

Covering The Bare Essentials That Should Exist For All APIs
I wanted to make sure each API had the bare essentials, so I took what the VA has already done over at developer.va.gov, and republished it as a static single page application that runs 100% on GitHub pages, and hosted in a GitHub repository–providing the following essential building blocks for APIs at the VA:

Bringing In Some Other Essential API Documentation Elements
Beyond the landing page, interactive documentation, OpenAPI, and Postman Collection, I wanted to suggest some other building blocks that would really make sure API developers at the VA are properly documenting, communicating, as well as supporting their APIs. To go beyond the bare bones API documentation, I wanted to suggest a handful of other elements, as well as incorporate some building blocks the VA already had on the API documentation landing page for the VA Facilities API.

I tried not to go to town adding all the building blocks I consider to be essential, and just contribute couple of other basic items. I feel support and road map are essential and cannot be ignored, and should always be part of the minimum viable API documentation requirements. My biggest frustrations with APIs are 1) Up to date documentation, 2) No support, and 3) Not knowing what the future holds. I’d say that I’m also increasingly frustrated when I can’t get at the OpenAPI for an API, or at least find a Postman Collection for the API. Machine readable definitions moved into the essential category for me a couple years ago–even though I know some folks don’t feel the same.

A Self Contained API Documentation Blueprint For Reuse
To create the minimum viable API documentation blueprint demo for the VA, I took the HTML template from developer.va.gov, and deployed as a static Jekyll website that runs on GitHub Pages. The landing page for the documentation is a single index.html page in the root of the site, leverage Jekyll for the user interface, but driving all the content on the page from the central config.yml for the API project. Providing a YAML checklist that API developers can follow when publishing their own documentation, helping do a lot of the heavy lifting for developers. All they have to do is update the OpenAPI for the API and add their own data and content to the config.yml to update the landing page for the API. Providing a self-contained set of API documentation that developers can fork, download, and reuse as part of their work, delivering consistent API documentation across teams.

The demo API documentation blueprint could use some more polishing and comments. I will keep adding to it, and evolving it as I have time. I just wanted to share more of my thoughts about the approach the VA could take to provide function API documentation guidance, as a functional demo. Providing them with something they could fork, evolve, and polish on their own, turning it into a more solid, viable solution for documentation at the federal agency. Helping evolve how they deliver API documentation across the agency, and ensuring that they can properly scale the delivery of APIs across teams and vendors. While also helping maximize how they leverage GitHub as part of their API lifecycle, setting the base for API documentation in a way that ensures it can also be used as part of a build pipeline to deploy APIs, as well as manage, testing, secure, and helping deliver along almost every stop along a modern API lifecycle.